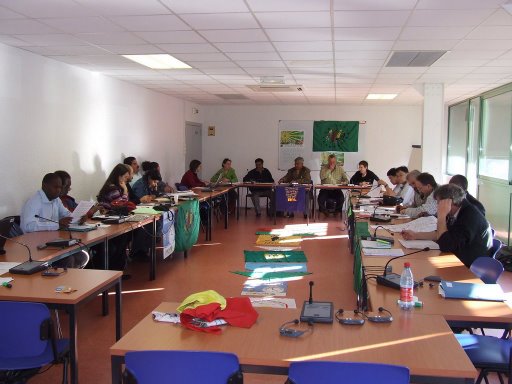 From 11th to 13th January 2008, 21 delegates and members of Via Campesina, from the Dominican Republic, Nicaragua, Costa Rica, Peru, South Korea, Norway, France, Haiti, Mali, Italy, the United States, Mozambique, Turkey, the Basque Country and Nepal, met in Dijon for a strategic seminar on the theme “Food Sovereignty and Free-Trade Agreements” convened and organised by the Via Campesina’s Food Sovereignty work committee.

To set the meeting in context, since 2005 (Hong-Kong) The World Trade Organisation (WTO) has appeared to be in a vegetative state. As negotiations between member countries have not been able to come to fruition, the large economic powers – in particular the United States and the European Union – have reinforced strategies for the setting up and development of free trade agreements (FTA) with countries or groups of countries. As they are not negotiated within the multilateral framework of the WTO, these agreements are said to be bilateral. Economic Partnership Agreements (EPA), negotiated between the European Union and the ACP countries, are one of the forms these FTAs can take.

These bilateral agreements often go beyond the WTO’s requirements on liberalisation. They spring up all over the world, and are totally non-transparent as far as the populations of the countries are concerned (as much in the North as in the South). The sheer number of them, the lack of information concerning them, and their complexity, makes it very difficult to mobilise citizens to fight against them, even though their consequences are catastrophic for small farmers and the population in general. If we can consider the WTA as a well-identified target, the FTAs, on the other hand, make the expansion of the neo-liberal system even easier, as, with the exception of certain cases, they are set up almost without any popular resistance.

The goal of the Dijon seminar was therefore to come up with a common analysis of the problems created by FTAs and then reflect upon the combat and solidarity strategies which could be implemented to stop them. As some countries have succeeded in delaying or preventing the signing of these agreements, the first day of the seminar allowed for an exchange of experiences of positive struggles. Popular movements in Korea and Costa Rica, resistance from the ECOWAS countries: examples which can give confidence to the whole of Via Campesina that, after victories over the WTO, victories over EPAs are possible. More than ever, food sovereignty is the value to oppose free trade…

Representatives of social movements and friendly organisations who are also working on the issue of FTAs and EPAs then joined the members of the food sovereignty committee, in order to broaden the reflection and construct a strategy for common struggle (Friends of the Earth, World March of Women, WFFP, Focus on the Global South, ATTAC, CFSI…). The participants’ common declaration, committing to act together against free trade agreements, was drawn up (see on www.viacampesina.org).

Solidarity with the hunger strikers

On their arrival in France on Thursday 10th January, the four delegates from Nepal, Mozambique, the Basque Country and the United States went to the sites in Paris where José Bové and 15 fellow demonstrators were on the 8th day of a hunger strike. The objective of this strike was to force the French government to issue a moratorium on the cultivation of transgenic maize. It was a moving expression of international solidarity: during a press conference organised at the sites, the international delegates paid tribute to the sacrifice and radical struggle of the 16 comrades, and emphasised that the French activists’ struggle was part of the struggle for small farmers the world over, and an example for all.

On 12th December, on hearing the news that this strike had borne fruit, the international delegates telephoned the group of strikers from Dijon, in order to congratulate them and celebrate the historic victory together, with a shared and reciprocal “mistica”.