La Via Campesina and GRAIN release two new documents on food and climate change ahead of the People’s Summit on Climate Change in Lima, Peru. 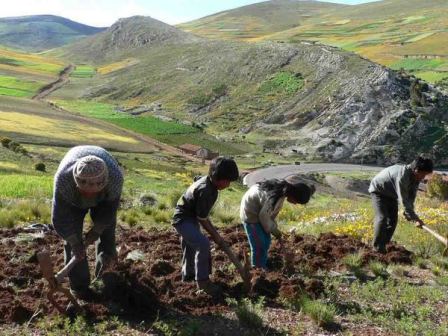 With this year’s UN Climate Change Conference under way in Lima, La Via Campesina and GRAIN announce the joint publication of two new documents that detail how a global programme to support food sovereignty can resolve the climate crisis and feed the world.

The documents show how the dispossession of peasants and indigenous peoples of their lands has laid the basis for destructive resource extraction and an industrial food system that is responsible for 44-57% of all greenhouse gas emissions.

La Via Campesina and GRAIN explain how a worldwide redistribution of lands to small farmers and indigenous communities – combined with policies to support local markets and ecological agriculture – can reduce global greenhouse gas emissions by half within a few decades, significantly curb deforestation and meet the food needs of the world’s growing population.

La Via Campesina is the international movement which brings together millions of peasants, small and medium-size farmers, landless people, women farmers, indigenous people, migrants and agricultural workers from around the world. It defends small-scale sustainable agriculture as a way to promote social justice and dignity.