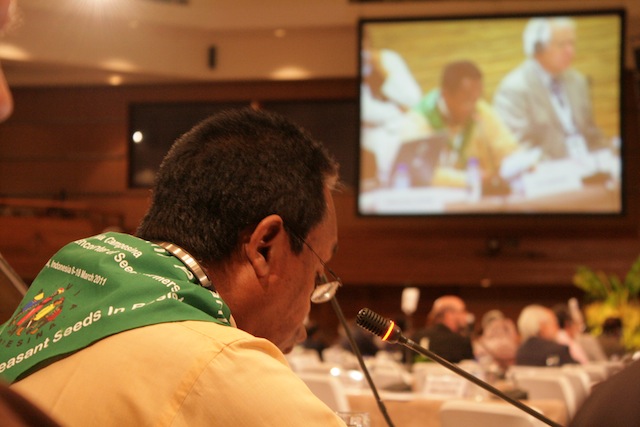 The Treaty has already fulfilled the core of its first mission, which consists of making farmers’ seeds, available to industrial firms in the North. Over 90% of its seeds originate in countries of the South. In exchange the Treaty has given itself a second mission : the sharing of economic benefits generated by industry derived from these seeds and the recognition of farmers’ rights to re-sow, exchange and sell their seeds and to protect their knowledge.

The Treaty, however, did not complete the second mission. The industry refuses to pay for benefit sharing and nothing suggests it will pay tomorrow. The realization of Farmers’ Rights has been entrusted to States but instead, most governments implement the rights of breeders that are a denial of Farmers’ Rights. Benefit-sharing, therefore, amounts to banning farm-saved seed in the case of patents; and the payment of royalties paid to industry by farmers in the case of Plant Breeders’ Rights, the appropriation by seed industry farmers’ seeds contaminated by GMOs, or in many countries to ban informal exchange of seeds between farmers.

Here in Indonesia farmers have been thrown in jail for re-sowing part of their own harvests. Industrial Property Rights on seeds are a theft of farmers’ seeds, they must be revoked if Farmers’ Rights are to be respected. The replacement of local seed for hybrids or GMOs that farmers cannot replant also infringe upon Farmers’ Rights.

La Via Campesina supports the position of the African group that believes that the lack of funding of the Treaty or the implementation of Farmers’ Rights must be regarded as cases of non-compliance.

Today, most rich countries refuse to pay their financial contribution to the Treaty, which cannot therefore complete its second mission. Thus, the Governing Body meeting in Tunis in June 2099 requested the Secretariat to conduct a workshop in each region on obstacles to the realization of Farmers’ Rights, “subject to available funding”. But the mission could not be completed because there was no funding available.

More than 90% of seeds stored by the multilateral system were taken in farmers’ fields: small-scale farmers who select and save their own local seeds should have unconditional access to these seeds. Similarly, industry must unconditionally pay the debt it incurred by freely taking seeds from farmers. The repayment of a debt in reparation of a theft has never allowed the same theft to continue.

Farmers’ participation in agricultural policy-making and access to land for seeds to grow, and access to water essential to their cultivation are inseparable from Farmers’ Rights to seed. The right to seed is an integral part of the declaration on Farmers’ Rights currently being debated at the UN.

La Via Campesina supports the request of NGOs to establish a permanent working group on the model of Committee on Food Security to develop guidelines on Farmers’ Rights and Sustainable Use, and regularly monitor their implementation in each signatory country. It requests the Governing Body to vote the budget necessary for its operation. The Treaty will not survive without the constant renewal of seed diversity in farmers’ fields and thus without the realization of their rights.