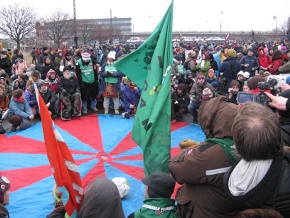 Farmers from the international peasant’s organisation La Via Campesina are joining the “Reclaim Power Action” today in Copenhagen starting at 8 am at Tarnby train station and going to the Bella Center where the UN Climate talks are being held. This protest is co-organised by the large coalitions of social movements, NGOs, unions and activists in Climate Justice Action and Climate Justice Now!

Farmers reclaim the power to exist
Free-market-oriented agricultural policies and transnational companies destroy farmers lives. Small farmers already lose their livelihoods due to mass imports of cheap subsidised food and WTO policies and we are evicted by infrastructure and other “development projects”. The mechanisms currently discussed during the climate talks will further drive us from our lands and deny us our livelihoods. For example, the pressure on land for agrofuel production already expell us from our farms.

Farmers reclaim the power to save the climate
Farmers are shocked by the complete commercialisation of the climate talks. We must not allow the invention of a carbon market. It will only futher strenghten the transnational companies who have over-exploited the planet and created the current crisis. Farmers, workers, women’s groups, indigenous people and communities from around the world propose real solutions to climate change. One of these is to support sustainable family farms and local, direct food markets.

Farmers reclaim the power to build a real people’s project
Today, outside the Bella Center people from around the world will set up a people’s assembly to discuss the real solutions to the current crises and the real policies and practices that urgently need to be implemented. This assembly is taking place outside the official conference because there is no space inside for people’s voices to be heard. The talks are being controlled by the governments and big businesses who support the system which has led us here  and the needs and real alternatives of the majority world are being sidelined. It is time for our alternatives to be made real.

Farmers reclaim the power to oppose violence
The real violence is happening inside the negotiation rooms. Decisions taken there (and NOT taken there) are leading to more natural disasters, more land grabs, more evictions in the name of environement protection and more hunger and poverty. The more the talks advance, the more farmers and activists are muzzled. Some countries are excluded from the discussions through the “green room” processes, accreditations to the conference are suddenly being restricted and protestors are arrested arbitrarily

La Via Campesina condemn the massive police repression of the protests, the preventive arrests to avoid free expression of dissent and the “show business arrests” of protestors. We support and take part in non-violent actions of civil disobedience in order to develop a society with more justice and dignity. We clearly reject violence as a means of action as we reject the violence of the policies discussed behind closed doors. We are protesting today against the current global model of society obsessed with trade and the privatisation of the commons and we continue our struggle for solidarity, climate justice and food sovereignty.