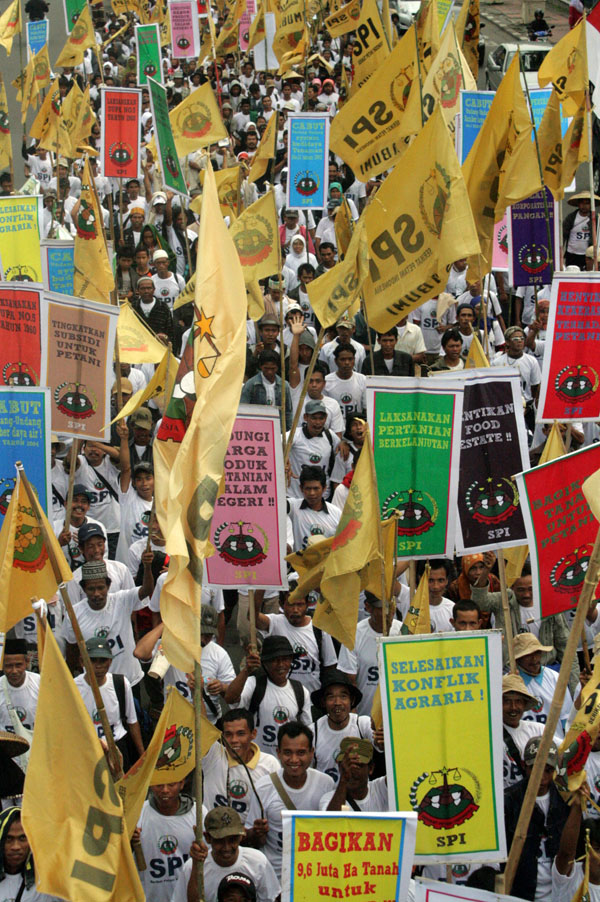 JAKARTA. Some 20-thousands peasants from all across Indonesia marked the 50th commemoration of the National Farmers’ Day on Sept. 24. Half of the number chooses to rally along Jakarta on that day, focusing to the Presidential Palace.

These parallel actions all across Indonesia were organized by 44-organizations, mostly farmers’ organizations, to remind President Susilo Bambang Yudhoyono that he made a speech on 2007 saying that the government was to pursue agrarian reform. “No implementation of the program whatsoever until now,” said Henry Saragih, chairman of the Indonesian Peasant Union.

Meanwhile, there are 9.6 million hectares of unclaimed land ready to be redistributed to the people. The government seems only focusing on “market-led agrarian reform”, as advised by the World Bank from 1999 to 2004. This includes titling, cadasters and land registries. Of course it fails to adhere with the problems of food sovereignty, human rights (most notably the rights to land), and furthermore—justice.

The peasants lament the inequalities in land ownership that have been disparate for decades. “Yes, the number of land conflicts has been in decline since 2009, however, the total area of land involved in conflicts is on the rise, increasing more than six fold to 328,000 hectares from 49,000 hectares in 2008,” Henry Saragih further claimed. The expansion of plantations and estates by the government and private sectors also played role in those dark statistic. Landlessness and land-poor are huge problems, with 25.6 million family farmers who only have an average of 0.4 hectare of land.

In the Presidential Palace, some farmers met with some presidential staffs. They discussed 9 demands on how the agrarian reform program should be implemented by the government. How to implement a genuine agrarian reform by redistributing 9.6 million hectares is on the top list. Peasants also asked the government to create a national ad-hoc committee on agrarian conflict, and reviewing some 14 national regulations that are not in favor of their rights.

“The government has to go back to the right track of agrarian reform, “ say one protester. “The president has to be firm, leading the country for a genuine agrarian reform—that could be the revival of this nation,” say another one. Head of National Land Agency, Joyo Winoto, said that 360,000 hectares of land are ready to be redistributed this year. Nonetheless, many regulations are still not synchronized with this effort. “This should be one of the government’s focuses—at least until 2014,” add Henry.

This years’ commemoration of National Farmers’ Day is a real celebration of peasants, indigenous people, agricultural workers, the land-poor and the landless. Fifty years ago, Basic Agrarian Law (UUPA 1960) mandated the “land to the tiller” principle. It is one of the good pieces of legislation that has not been implemented until now.

The ball is now on the government’s court. One thing that is crucial, said Henry is that this agrarian reform program will be nothing if it does not involve the people. “Okay, we appreciate the government’s commitment for agrarian reform. But we have to make sure that we are the beneficiaries and we get the right land in order to produce food,” he concluded after the meeting in Presidential Palace.