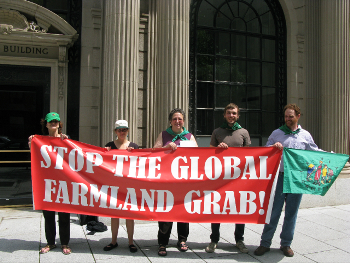 [Washington DC, 22 April 2010] La Via Campesina, FIAN, Land Research Action Network and GRAIN, together with over 100 allies, are issuing a loud appeal to stop the current wave of land grabbing that is taking millions of hectares of farmland away from rural communities across Africa, Asia and Latin America. Their appeal coincides with the release of a new World Bank report that confirms the massive extent of of the current land grab assault and puts forward seven “principles” to make these land deals socially acceptable. The Bank’s strategy will be presented in Washington DC at a Roundtable on April 25, co-hosted by Japan, the United States and the African Union, and at the World Bank’s Annual Land Conference on April 26.

In a statement, the movements and organisations denounce the Bank’s proposals as an attempt to “reduce the risk of social backlash” while pushing ahead with the take-over of agricultural land by corporate investors. “The World Bank’s principles,” the groups argue, “aim to distract from the fact that today’s global food crisis will not be solved by large scale industrial agriculture, which is what all of these land acquisitions are about.”

A breakfast media briefing will be held on Monday, April 26 at 7:45am at the Bread Line Restaurant (1751 Pennsylvania Ave. NW, Washington, DC 20006). Representatives of the National Family Farm Coalition/Via Campesina and GRAIN will be present to explain why win-win landgrabbing, as proposed by the Bank, is impossible and what steps are required to solve the global food crisis.

On Sunday April 25, from 2:00pm to 3:00pm, groups will be in front of the Millennium Challenge Corporation offices at 875 15th St. NW, where the official Roundtable event will be held, to inform delegates of the position of social movements.

The statement can be viewed on-line here: http://farmlandgrab.org/12200

— La Via Campesina is the international movement of peasants, small- and medium-sized producers, landless, rural women, indigenous people, rural youth and agricultural workers with 148 members in 69 countries: www.viacampesina.org.  FIAN is an international human rights organisation with members and sections in 50 countries to advocate for the realisation of the right to food: www.fian.org. LRAN is a network of researchers and social movements committed to the promotion of individuals’ and communities’ right to land: www.landaction.org. GRAIN is a small international non-profit organisation that works to support farmers and social movements in their struggles for community-controlled and biodiversity-based food systems: www.grain.org and farmlandgrab.org.

— Over 100 movements and organisations in over 100 countries are co-sponsoring this initiative and carrying out their own localised media events on or around 26 April. To contact any of them, particularly about what is happening with land grabbing in their country or region, please get in touch with Kathy Ozer (+12024214544) or Devlin Kuyek (+15145717702).