Home » Exchange of seeds between peasants is at the heart of the collective systems of conservation: La Via Campesina at the UN

On Thursday, May 18, the last day of interventions at the working group meeting on Rights of Peasants initiative in Geneva, delegates of La Via Campesina intervened during discussion on right to to housing, to social security, to education and cultural rights and traditional knowledge.

While speaking on Right to seeds, Geeta Devarajan representing La Via Campesina’s South Asian movements said: ““A Peasants right towards Plant genetic resources namely seeds, seedlings and all reproductive system of plants is a fundamental right of a Peasant.  A Peasant cannot be distinguished from his plants and crops and further to the seeds of his crops and plants. If a Peasant does not have the right to seeds it amounts to saying that human beings do not have the right to their off-springs.  It is like taking away the reproductive right of a woman to say the least.

In this context the right to seed is not something that is being demanded by a peasant to enrich one’s own self and family but for the protection of mother earth, protection of the health of the community at large, promote the environment of our community.  The traditional seed varieties do not demand much water and thereby protects the water resources.  The traditional seeds do not demand chemical fertilizers and pesticides thereby prevents air pollution and protects the health of a peasant and rural workers.” 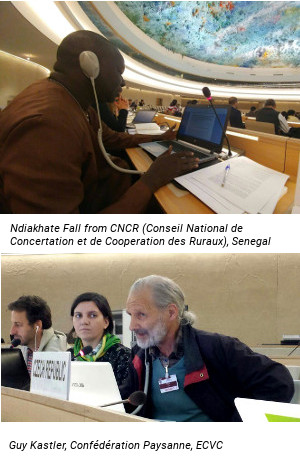 Ndiakhate Fall from CNCR (Conseil National de Concertation et de Cooperation des Ruraux) points to how with the evolution of the current dominant agricultural system certain traditional techniques have disappeared along with local varieties of seeds that have been replaced by commercial rigid varieties that force peasants to continuously buy new seeds. “After being undermined by several decades of industrialization and speculation, our seeds are now threatened of being definitely banned by new regulatory processes. It is important to know the rights of farmers on seeds.”

Guy Kastler addressed the suspicion expressed by certain states in regards to the scope of this Article. “Depriving peasants of their rights to conserve, exchange, use and sell their seeds, is an unacceptable attempt against human rights – The exchange of seeds between peasants is at the heart of the collective systems of conservation and renewal of local seeds which constitute the cultural identity of peasant communities.” At the same time, as a way to reassure skeptics he pointed out to the many different countries that currently allow the exchange of peasant seeds in their territory.

It must also be noted that during the day opposition was strong from the EU and other countries such as Guatemala, Japan and New Zealand who were unwilling to recognize land, seeds, decent income, food sovereignty and a safe and clean environment as human rights.

For more updates on the Fourth session, click here.