Nairobi, January 20th, 2007 – The Seventh Annual World Social Forum kicked off today in Uhuru Park in Central Nairobi, Kenya, in front of a crowd of tens of thousands of social activists from Africa and the rest of the world.  Between performances from African, Caribbean and Brazilian musicians, journalists from all the continents spoke, including from Palestine, and the event’s organizers mediated the ceremony.  Via Campesina, the global alliance of peasant, small farmer, indigenous peoples, landless and agricultural laborers, and rural youth and women’s organizations, has formed part of the international council of the Forum since its initiation in Porto Alegre, Brazil.  During the opening ceremony today, Juana Ferrer, national director of the National Confederation of Peasant Women of the Dominican Republic (CONAMUCA)   and member of Via Campesina’s Commission on International Coordination, spoke on behalf of Via Campesina. 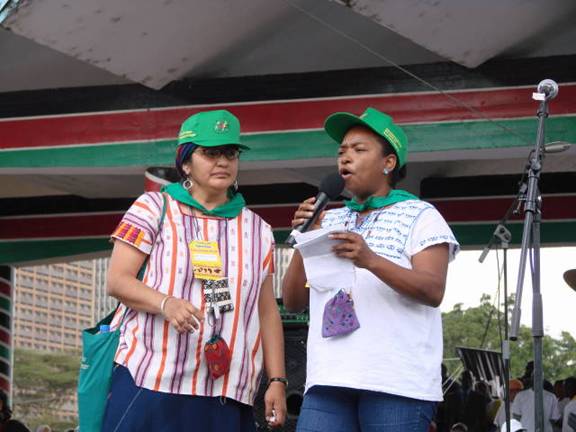 Juana Ferrer of Via Campesina at the Opening Ceremony of the Forum, with her interpreter Maria Elena Martinez. Photo: Pedro Café

“We welcome you all to the Forum on behalf of Via Campesina.  We are the peasants, the farmers of the world, united in our struggle.  And me in particular, I am from America; Americans and Africans are two peoples with the same path, the same culture.  We embody the hope, the strength, and the resistance to savage imperialism.  We fight against those who try to undermine our riches, cultures, and people.  And we fight against those that are seeking to impose the neoliberal model upon us, a model that seeks to privatize our land, our seeds and our water; a model of free trade that makes it impossible for us to make a living in a dignified manner.  In the face of this, we of Via Campesina are firmly resolved to fight for food sovereignty, and for another world that we know is possible.  We reaffirm here at the World Social Forum – from the heart where humanity was born – our desire to fight, together with you.  Our unity is our strength, the force which we will use to defeat the Empire, its institutions, and its politicians.”

Latin America Advances with Alternatives, Such As:

ALBA – Bolivarian Alternative for the Americas.  An alternative to free trade agreements.
The heroic example of the Cuban Revolution
The consolidation of the Bolivarian Revolution in Venezuela
The new revolutionary governments of Bolivia and Ecuador, and the return of the Sandanistas in Nicaragua