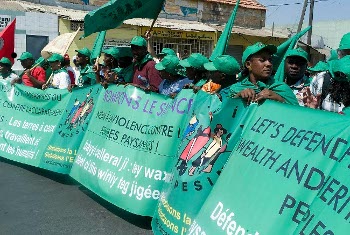 (Dakar, February 7) – The 11th World Social Forum, in Dakar – Senegal began yesterday, with something halfway between a march and parade: a march, in the sense of people using the act of walking to send an explicit political message, and a parade, in that the joy of the participants was so infectious, even the police had to chuckle as La Via Campesina’s delegation added, “Oye, Securitie” to their usual chant honoring the presence of over 50 representatives from all over the world – “Oye, Senegal, Mali, Togo, Congo, Mozambique, Indonesia, Guatemala, South Africa, Tanzania!” This first day of the World Social Forum was exhilarating for all the delegates, though the 5 kilometer walk under the Senegalese sun was just a small foreshadowing of the effort it will take to truly prove, over the next 5 days, that “another world is possible.”

“Today was inspiring—the number of people, the countries they represented, the solidarity we felt, and the willingness of people to create change; to support each other,” said Bigambo Ladslaw from Tanzania, La Via Campesina delegate. José Mateus, delegate from Mozambique, added, “Today was extremely positive. The interchange with organizations was great, and the long march reflected the strength of the efforts we all take to work and organize.” 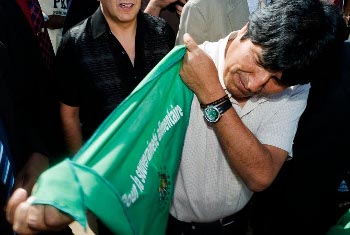 The march ended at the University of Dakar, where speakers like Evo Morales shared a message against neo-liberalism and neo-colonization, and a vision of a future where public policy is based upon the needs of the people rather than the hunger of capitalism. Morales also mentioned that, having been both a labor and peasant leader in the past, he recognizes the great importance of people’s movements in building political power.