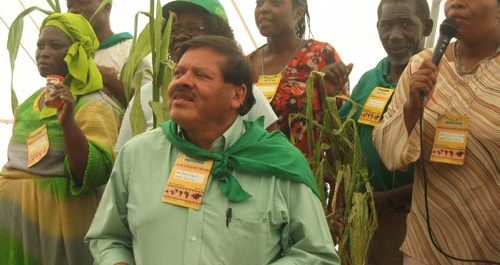 January 23, Nairobi. La Via Campesina launched the African part of the Global Campaign for Agrarian Reform today during the World Social Forum in Nairobi. The campaign has been developing in Latin American since 1996 and now the good fruits of the campaign can be harvested on African soil. One of the objectives is the fight against hunger.

“We are convinced that we are making advances in Latin American and now, this example can be followed in Africa. We must advance in this continent, the poorest in the world. Nowhere else is there so much poverty. One of the things that must be done to combat this misery is to recover the natural resources (water, land, seeds, mines, etc.) on behalf of the people. In South Africa alone, there are around 15 million landless people”, says Rafael Alegria, international coordinator of the campaign. 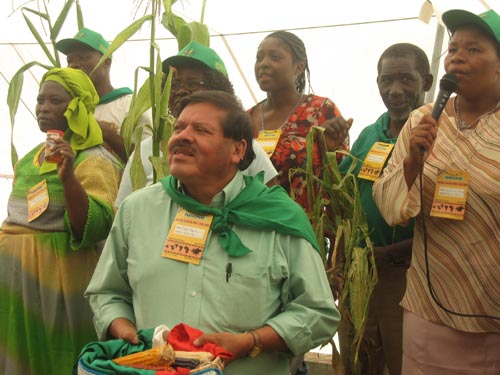 The handover of Zapatista corn.

For the coordinator, the concept of agrarian reform is food sovereignty for all, and not only for indigenous people and peasants. “For this reason, we have sought to make alliances with other organizations and social movements in order to build a huge powerful people’s movement in Latin America, Africa, and Asia. After Africa, the goal is to initiate the campaign in Asia”, he says.

During the launch, Diamantino Nhampossa from Mozambique, a representative of the National Union of Farmers (UNAC) and coordinator of La Via Campesina in África, highlighted the cruelty of colonization and the struggles for the liberation of the African people. “500 years ago, colonialism took our lands. Since the decade of the 80s, our lands are being seized by the World Bank and now the only way out is to mobilize and carry out campaigns like this one, to motivate the people to struggle for their rights”, Diamantino states.

At the end of the event, native seeds from Mayan corn sent by the Zapatistas from Mexico were handed over to the men and women farmers of Africa.

For Rafael Alegria, it is important that there are spaces to strengthen the peasant struggle, like the WSF.  “This edition represents an opportunity to strengthen the African people.  ‘Another world is possible!’ is the motto of the WSF, and after six years we can be sure that another countryside is possible.”