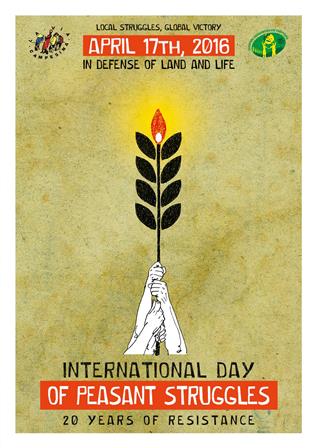 It has been twenty years since the tragic day in Brazil’s northern state of Pará where 19 peasant men and women were murdered by government security forces. Considered by many as the culmination of the regional –and global- persecution against those defending their land against corporate interest, today the persecution and violence perpetrated against us has not eased.

In the global North as in the global South, the offensive against peasant lands and rights has been unrelenting. Since the beginning of 2016 the reports of peasant leaders murdered have been continuous. Fourteen in Honduras; six in the last six weeks in Colombia, and two landless peasant members of Brazil’s MST movement were killed just last week.

Here in Europe, the lengthy siege against small and family farms by states and corporations has led to an ever greater concentration of land, with now the top 3% of farms controlling half of the total amount of arable land. Resistance is fertile though, as in France, where despite violent repression and judicial persecution, the community of Notre Dames des Landes has, for the last 40 years, been holding out against the building of an airport on 1200 hectares of their agricultural land. A similar scenario is happening near Brussels, in the neighborhood of Haren, where citizens have been resisting to the building of what would be the country’s largest prison in 18 hectares of their fertile land.

The picture is grimmer in Spain where peasant leader Andrés Bódalo was condemned to three and a half years of prison for participating in a demonstration against agribusiness. Farther east, in Romania, land-grabs by large companies are dispossessing peasants of millions of hectares of farmland. Lastly, in Turkey, in complete disregard of local opposition and backed by well-armed security forces, the government is aggressively pushing for development projects in peasant lands.

This day is not only about bringing to light the concerns of peasant farmers; it is the sustainability of society as a whole that is at stake. The question of land is central to the concept of Food Sovereignty. According to the United Nations a main cause of hunger and malnutrition is the lack of access to land. The fact that an increasing number of peasant are being driven away from their lands and that they provide 70% of our food, not only represents a danger to local food systems, but to global ones as well. In Europe, as in the rest of the world, the dispossession of peasant farmers is having disastrous social, environmental and economic effects.

In light of this situation, political action is expected. In Europe it’s time for the Commission and the EU Council to wake up to the crisis affecting its peasant farmers. On this International Day of Peasant’s Struggles, the European Coordination Via Campesina wants to reiterate the need for a European Directive on Land Tenure based on the Voluntary Guidelines endorsed by the Committee of World Food Security; or in simpler terms: we want land reform.

This 17th of April, reasserting our demands for land and rights, honoring those that have paid this struggle with their lives, and celebrating our peasant movement, ECVC and its members are carrying out a series of actions, conferences, farmer’s markets throughout the continent; the same way as it’s been organized throughout the world. The peasant struggle for land and rights is global.

Below you will find a non-exhaustive list of various actions organized by our members across Europe. At the same time we call on people across Europe to join our struggle in defense of Food Sovereignty and against the destruction of our planet.

UK : http://landworkersalliance.org.uk/ – place and time to be confirmed