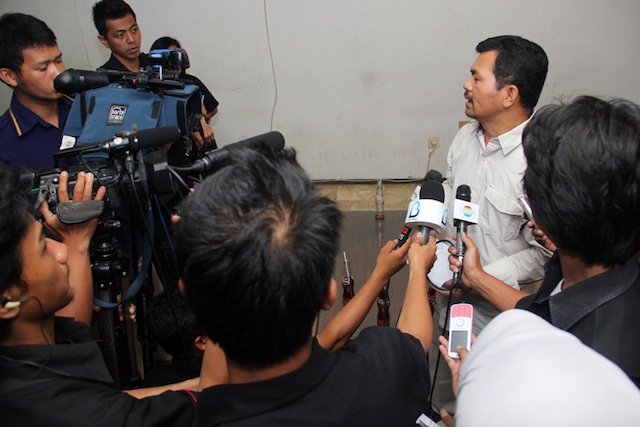 Escalating phenomenon of land grabs is resulting to thousands of land conflicts in Indonesia.

In 2011 there are 2,791 cases all across the agrarian country—two of them surfaced to became national matters. Mesuji and Bima case were so alarming because it brutally showed the violence side of conflict: people are shot dead and the vast area of agrarian resources involved. These two cases sparked national mobilization for the urgent need to further protect the rights of peasants and other people working in rural areas. And reality bites: there are little—if we don’t want to say nothing at all—agrarian reform in Indonesia.

In conjunction to those facts, Serikat Petani Indonesia (SPI) commemmorate the international peasants struggle day with the emphasis of resolving agrarian conflicts and law reform. Together with 9 other people’s movements and NGOs, SPI launched a judicial review process on Law No. 2/2012 on Land Acquisition.

There are three aspects requested to be overviewed in Constitutional Court: the human rights, policies on agricultural products marketing, and the relations with peasants organization. In conclusion, the law deemed to be contradictory with the National Constitution.

In separate place, Sukardi, Chairperson of SPI West Sumatera also launched a provincial action in April 17. “There are 14,400 hectares-wide land conflict involving 3,477 households in our basis,” he said in Padang, the capital of West Sumatera. “We need full attention from the government, who grab the indigenous land unilaterally for conservation,” he expained. Not only the indigenous land versus government, the people in West Sumatera also have to fight land grabs launched by major palm oil corporations, such as state-owned PTPN VI, and privates like Bakrie Sumatera Plantations and PT Sago Nauli.