Home » Events » Germany: Save life in the countryside/ against the global industrial agriculture system 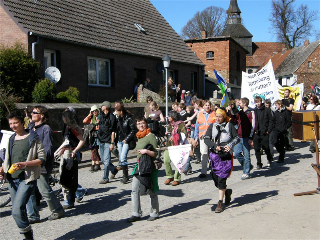 Germany: Save life in the countryside/ against the global industrial agriculture system

Around the 17th various groups, organisations and networks condemned the effects of soy production for animal feed in South America, particularly within Paraguay and/ or the effects of industrial meat production in piglet-factories and mast-plants within Europe.
17th of April:  FIAN and AI protested in front of the embassy of Paraguay in Berlin and demanded: Agrarian reforms in Paraguay! An hour later Nandu and attac protested in front of the chancellery and condemned: „Displacement for animal feed? – Stop the construction of piglet factories and mast-plants! 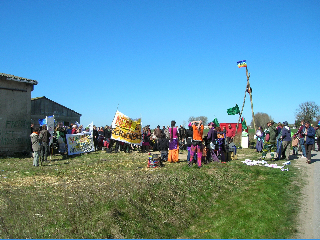 Alt Tellin: We from the „action network global agriculture“ had given a call to occupy the area (symbolically) in the commune Alt Tellin, where the investor Straathof plans to construct Europe’s biggest piglet factory.  Around 100 people joined us. With the slogan: Here slurry and there hunger – save life in the countryside! – We protested against the uprooting and displacement of people in Paraguay in the context of soy production for animal feed and migration into the cities within Europe cause of the industrial (agricultural) system and for food sovereignty. Within a couple of hours we turned the area into a creative space, had discussion rounds, did wall paintings, gardening, had people’s food and enjoyed/did cultural programs.
On the 18th we joined the march “Save life in the countryside” of the local citizens´ initiative “Leben am Tollensetal”. We started from our camp and joined two other rallies. All together we were around 150 to 200 people participating in a manifestation. Afterwards we had a village celebration with speeches, including one speaker from AbL among others, had exhibitions, concerts, theatre etc.  For more information see www.globale-landwirtschaft.net   Contact: globale-landwirtschaft@so36.net