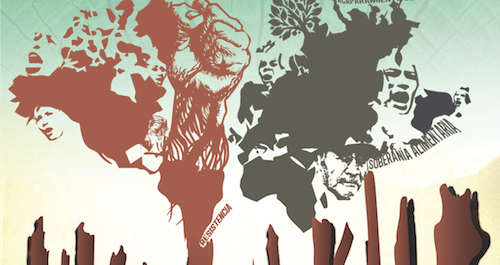 Use the poster attached! 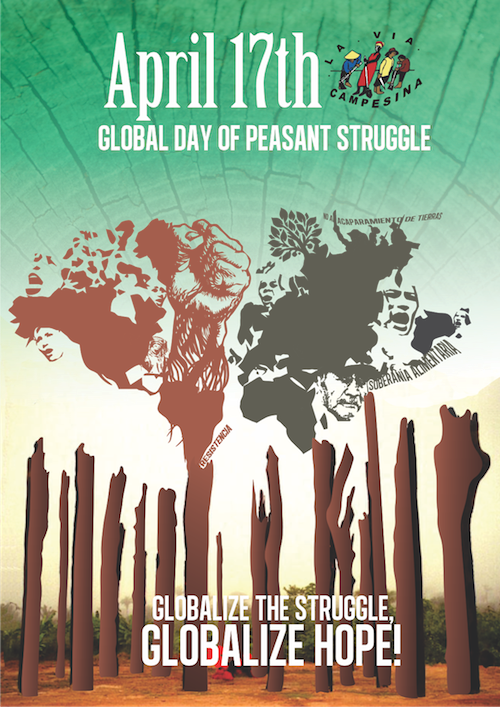 (Jakarta, 2 March 2012) April 17 is the International Day of Peasant Struggle, commemorating the massacre of 19 peasants struggling for land and justice in Brazil in 1996. Every year on that day actions take place around the world in defence of peasants and small-scale farmers struggling for their rights.

In recent years, we have suffered from the implementation of new policies and of a new development model based on land expansion and land expropriation, commonly known as land grabbing. Land grabbing is a global phenomenon led by local, national and transnational elites and investors, with the participation of governments and local authorities, in order to control the world’s most precious resources.

Land grabbing has resulted in the concentration of the ownership of land and natural resources in the hands of large-scale investors, plantation owners, logging, hydro-power and mining companies, tourism and real estates developers, port and infrastructures authorities, and so forth. This has led to the eviction and displacement of the local populations – usually farmers -, the violation of human rights and women rights, increased poverty, social fracture and environmental pollution. Land grabbing goes beyond traditional North-South imperialist structures: the involved transnational corporations are based in the United States, Europe, Chile, Mexico, Brazil, Russia, India, China, South Africa, Thailand, Malaysia, Indonesia and South Korea, among others.

Financial institutions such as private banks, pension and other investment funds have become powerful actors in land grabbing, while wars continue to be waged to seize control of natural wealth. The World Bank and regional development banks are facilitating land and water grabs by promoting corporate-friendly policies and laws, providing capital and guarantees for corporate investors, and fostering an extractive, destructive economic development model. Meanwhile the World Bank and some other institutions have proposed seven principles of Responsible Agricultural Investment (RAI) that are supposed to prevent abuses but in fact legitimize farmland grabbing by corporate and state investors. La Via Campesina and key allies have protested against this initiative for the past two years.

Land grabbing is a global phenomenon based on the corporate domination of agriculture through control over land, water, seeds and other resources. It is justified by many governments and policy think tanks through claims that agribusiness will modernize backward agricultural practices and guarantee food security for all. However widespread those claims may be, they have been shown to be entirely false in the real world.

The key players behind land grabbing prioritize profit over people’s well-being: they produce agrofuels if this is more profitable than food production, and they export their food production if this is more lucrative than selling it at home. In this race to profit, the corporate sector is increasing its control over food production systems, monopolizing resources, and dominating decision making processes. Business lobbies have strong political influence that often overrides democratic institutions; in addition, they act with the complicity of local and national elites (traders, politicians and community leaders) who fail to protect their own people from predation.

Land grabbing has been dispossessing peasants, small-scale farmers and indigenous peoples, especially women and the youth, from their sources of livelihoods. It is also ruining the environment. Indigenous peoples and ethnic minorities are being expelled from their territories by armed forces, increasing their vulnerability and in some cases even leading to slavery. Market-based, false solutions to climate change such as the fashionable concept of “Green Economy” are forever finding new ways to alienate local communities from their lands and natural resources.

Therefore La Via Campesina calls on all of its members and allies, fisher-folk movements, agricultural workers organizations, students and environmental groups, women organizations and social justice movements to organize actions around the world on April 17 in order to display massive popular resistance to land grabbing and highlight the struggle against corporate control over land and natural resources.

On April 17, groups and people are invited to organize a direct action, a film screening, a farmers market, a land occupation, a debate, a protest, an art exhibition, or any other event highlighting the same goal.