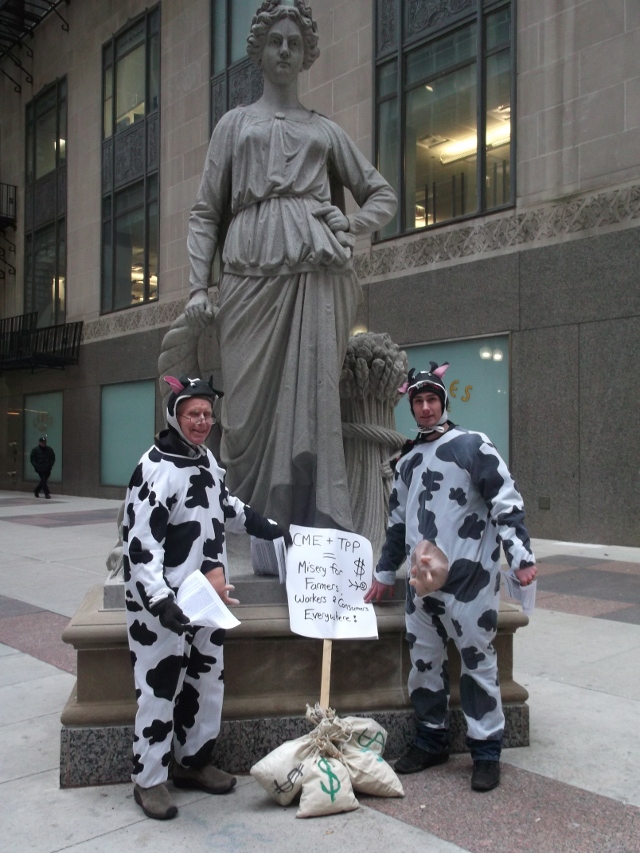 (Chicago, Illinois, April 9, 2014) – To mark Via Campesina’s International Day of Peasant Struggle, family farmers and their allies will converge at the Chicago Mercantile Exchange (CME) – 141 W. Jackson – at noon on Friday April 18, 2014 to expose the rampant price fixing by commodity speculators that drives the ongoing global food and climate crisis.

Family Farm Defenders’ annual protest at the CME demands greater social responsibility and transparency from one of Chicago’s most lucrative and secretive corporations, which posts billions of dollars in profits while rural workers and family farmers live in poverty

Dairy farmers in particular will call upon the Department of Justice (DoJ) to take action against the food giants – including Dairy Farmers of America (DFA) Land O’Lakes, and Dean Foods, which control close to half of all milk production in the country – that defy anti-trust laws and remain silent on price fixing at the expense of working farmer families.

Joel Greeno, family farmer from Kendall, WI and president of Family Farm Defenders, noted, “The CEO of Land O’Lakes may think that farmers only exist to serve the market. But farmers work hard to pay their bills and support their families first, and only serve the market second. As the rest of the world celebrates the U.N. Year of Family Farming, farmers across the U.S. are going bankrupt and being forced off the land by unfair prices.”

John E. Peck, executive director of Family Farm Defenders, said, “Small farmers have the capacity to feed the world and cool the planet, but speculation with commodity crops and carbon credits undermines that possibility. We hope that traders at the CME and officials at the DoJ will hear our voice and come to realize that there are more responsible ways to run a marketplace than what now occurs in Chicago.”

Marches and rallies are held around the world on Via Campesina’s International Day of Peasant Struggle every year to draw attention to economic, political, and cultural exploitation suffered by rural people and communities. It commemorates the massacre of 19 unarmed farm workers who were demanding agrarian reform in Brazil in 1996.

The same evening at 5:30 pm there will be a potluck and community forum on food sovereignty and climate justice at the Institute of Cultural Affairs (ICA) – 4750 N. Sheridan in Chicago. Featured panelists will include: Joel Greeno, WI farmer and president of Family Farm Defenders, Jed Schenkier of Loud Grade Produce and 2014 winner of the John Kinsman Beginning Farmer Food Sovereignty Prize, Seva Gandhi of the ICA’s Accelerate 77 which creates collaborative spaces for organizations of work on sustainability, Debar Michaud, organizer wit Tarsands Free Midwest, as well as invited speakers from Food and Water Watch (FWW), Chicago Fair Food, and the Landless Workers Movement (MST) of Brazil.

People are also encouraged to invite others to the April 18th events in Chicago via Facebook:
https://www.facebook.com/events/498757003561509/

Download a more detailed factsheet on the dairy crisis.