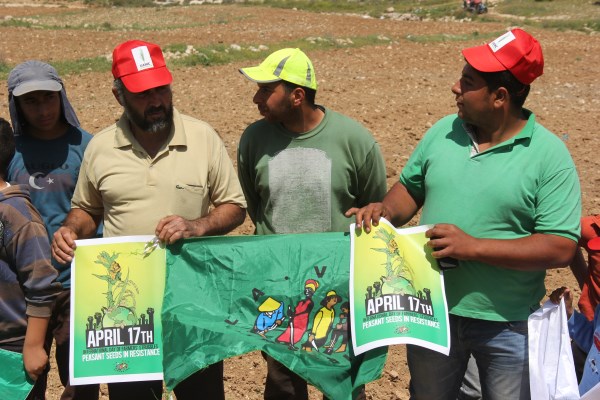 (Ramallah, April 17, 2014) – On the Day of Peasants’ Struggle (April 17th) the Palestinian peasants representing Via Campesina Palestine raise their voices to save the local seeds and abandon the genetically modified seeds in a small village in the city of Hebron named Beit Al-Roush Al-Foka in cooperation with the National Local Seed Bank initiated by the Union of Agricultural work committees’ (UAWC) which is the only seed bank in Palestine. The struggle of saving the local seeds is an international struggle in which all the farmers in La Via Campesina support to save the small-scaled farmers around the world and accomplish food sovereignty.

Palestine is considered one of the world’s largest users of pesticides and chemical fertilizers, according to World Health Organization (WHO) the Gaza strip had hundreds of tons of chemical fertilizers which causes health and environmental disasters. Moreover, in the last ten years the loss of the local Palestinian seeds has been noticed in addition to the purchasing of the local seeds by the GMO companies that increased the loss of local seeds and replaced them with GMO seeds.

Climate change, the accelerating trend in cultivating the GMO seeds, and water scarcity were the main motivators to initiate a Palestinian local seed bank. GMO seeds need large quantities of irrigation water, large quantities of fertilizers and pesticides in addition to lacking the genes that enable them to produce in the next season with the same quality and productivity traits which enables the GMO companies to monopoly the seeds sector. In contrary, the local seeds do not struggle from the above obstacles for they are naturally irrigated which is a very important property in Palestine due to the decrease of rain water quantities and the Israeli occupation’s control on the Palestinian water sources. Also, local seeds do not need fertilizers nor pesticides for their genes are adapted with the Palestinian environment such as the soil, water and climate.

Regarding the productivity, local seeds produce less in quantity than GMO seeds but their quality is much higher which increases their value in the local and international market which could enhance the farmer’s economic situation in the long run. Furthermore, the local seeds protect the environment and the humans from the chemical substances and adapts to the climate change in Palestine since its genes are adapted to the properties of the Palestinian environment such as the drought and salinity.

The Union of Agricultural Work Committees (UAWC) initiated the Palestinian Local Seeds Bank in 2010 after ten years of continuous work in the local seeds sector. UAWC worked on the multiplication and seed improvement of more than 36 varieties including vegetable crops and local field crops since 2003. The local seeds are preserved in the seed bank which is considered one type of hereditary banks to accomplish food sovereignty for the Palestinian farmers. UAWC also enlarged the cultivating area for the local seeds and the distribution centers, in addition to providing scientific information in partnership with the National Center for Agriculture Research, ICARDA, and Al-Aroub’s Agricultural Center.

The struggle of Via Campesina Palestine against the GMO seeds comes from their belief in the importance of contributing in the protection and preservation of the hereditary seeds in Palestine in order to accomplish food sovereignty for the Palestinian farmers and the farmers around the world.