Home » Events » April 17: Farmers mobilise around the world against Free Trade Agreements and for food sovereignty

April 17: Farmers mobilise around the world against Free Trade Agreements and for food sovereignty 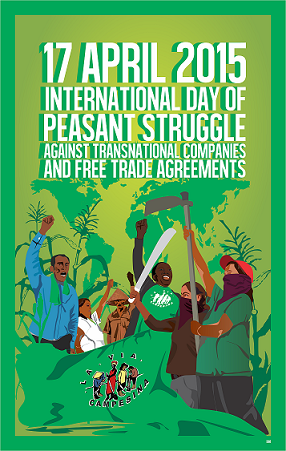 (Zimbabwe, Harare, April 17, 2015) Today thousands of women and men farmers of the international peasant movement La Via Campesina mobilize worldwide against Transnational Corporations (TNCs) and Free Trade Agreements (FTAs) which affect peasant and small-scale agriculture and national food sovereignty. Since April 17, 1996[1] La Via Campesina celebrates this day as a global day of action with allies and friends.

Free Trade Agreements promote TNCs and a capitalist industrialised mode of production heavily reliant on agrochemicals. These have increased the displacement, expulsion, and disappearance of peasants. Free Trade Agreements put profit over all other rights and concerns. Currently, the most significant FTAs in history are being negotiated by the European Union, the United States, and Canada. These agreements, if finalised, will liberalize trade and investment markets in favour of transnational companies (see tv.viacampesina.org/April-17th).

With hundreds of actions at local and global level (see our regularly updated MAP) in all continents, La Via Campesina reasserts the importance of local struggles and at the same time underlines the need of a global resistance and organization between the cities and the rural areas. Actions such as land occupations, seed exchanges, street demonstrations, food sovereignty fairs, cultural events, lobby tours and debates will be carried out until the end of the month as part of these global days of action. This year in Europe, various actions are being organised against Transatlantic Trade and Investment Partnership (TTIP), Comprehensive Trade and Economic Agreement (CETA), Trade in Services Agreement (TiSA) in Germany, Switzerland and Belgium; in Asia, a mass rally to reject the negotiation of Trans-Pacific Partnership (TTP) by Japanese government is being organised in Japan and South Korea; in South America, a big march (over 1,500 people from all continents) is being organised in Argentina during the CLOC-Via Campesina (Latin American Coordination of Rural Organizations) congress in Buenos Aires.

La Via Campesina denounces laws and interests that affect the peasant way of life, an important heritage of the people at the service of humanity. The movement promotes food sovereignty to end hunger in the world and promote social justice.

Instead of a gloomy future based on free trade and big business, La Via Campesina believes the time has come for an economy based on equity that will restore the balance between humanity and nature. Agrarian reform and sustainable agriculture are at the heart of this way of living based on peoples’ Food Sovereignty.

·        Register your actions by sending us information about the planned events to our mail: lvcweb@viacampesina.org

·        Please also send us pictures, videos, posters, flyers etc. We will publish them together with a map of all actions on www.viacampesina.org

[1]On April 17, 1996 in Brazil, military police forces assassinated 19 peasants in Eldorado dos Carajás (Pará). The farmers were members of the Movement of Rural Landless Workers (MST). On that day, 1500 men and women occupied and blocked the highway BR-150 in Eldorado dos Carajás with the goal of putting pressure on the state and federal government to carry out agrarian reform. Around 4PM 155 military police forces of the state surrounded the MST demonstrators, throwing tear gas and they fired guns at them. Therefore, in addition to the 19 massacred, three more died later and 69 were injured. State authorities, police, the army and landowners were responsible in the planning and execution of this massacre.