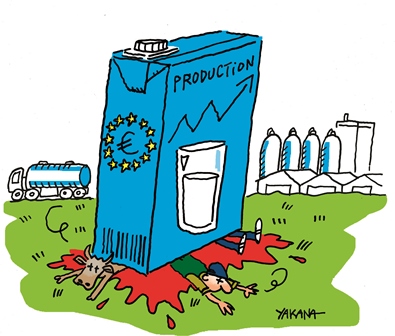 To the Presidency of the EU Council of Ministers of Agriculture

SUBJECT: POSITION OF THE EUROPEAN COORDINATION VIA CAMPESINA ON THE SITUATION OF THE DAIRY SECTOR AHEAD OF THE EU COUNCIL OF MINISTERS OF AGRICULTURE MEETING THE 15TH FEBRUARY 2016

On the occasion of the meeting of the EU Council of Ministers of Agriculture to be held next week in Brussels, ECVC wants to share with you its major concern regarding the unprecedented deep crisis European dairy producers are facing. It is our intention that on February 15th immediate action is taken within the Council to remedy this situation.

Since mid-2014, European dairy farmers are facing an untenable situation. Due to the prospect of deregulated dairy markets in the EU (taken on by most EU Member States), and the elimination of the milk quota system in April 2015, the volumes of milk offered in most European countries began to increase. The out-of-control surplus state of affairs we are in has been aggravated by the conduct of some dairies industries and companies of European distribution. Their abuse of the dominant position in the food supply chain has been reinforced as a result of the removal of the quota system- a decision whose terrible consequences for producers have not been curbed through the implementation of the Milk Package.

It seems evident that neither the measures contained in the Milk Package, nor the codes of good practice or other possible voluntary self-regulatory measures are contributing to ensure our survival as farmers and to defend fair prices for our milk. A legislation that does not consider as its main element the abuse of the bargaining power used by other agents in the dairy food chain, or that milk is a perishable product that prevents us from properly negotiating both individually and collectively, is clearly insufficient as a replacement tool of public policies regulating and controlling markets.

It also seems clear that all messages released during the months prior to the deregulation, and that encouraged the increase of milk production in European farms, have been seriously flawed. First, because they encouraged us to produce more, in prospect of an international market that is unable to absorb (or compensate) our productions. Second, for presenting as the only alternative to hold on to our livelihood the oversize of our farms and productions.

We cannot accept that the adjustment of the European dairy market be done at the expense of thousands of farms in Europe (herewith the “Status Report of the dairy sector” in which we can discern the tragic beginning of the on-going outsourcing of milk production at the European level). We cannot accept that many rural areas (many of which are mountain regions) are left without the economic driving force that is for them milk production and without other productive alternatives.

Therefore, we continue to consider necessary that the next Council of Ministers recognizes the catastrophic situation the sector is facing at the European level and that it takes a firm commitment on the creation and implementation of new public tools for regulating the dairy market and production control that ensure an adequate compensation in milk prices for farmers (that covers production costs), the preservation of the countless dairy producers as well as of their different models of sustainable milk production in the EU.

These measures should be implemented urgently if there is sincere willingness on the part of European governments and the European Commission that milk production be maintained in all territories of the European Union.

In the hope that our proposals are taken into consideration, please accept our sincere regards,