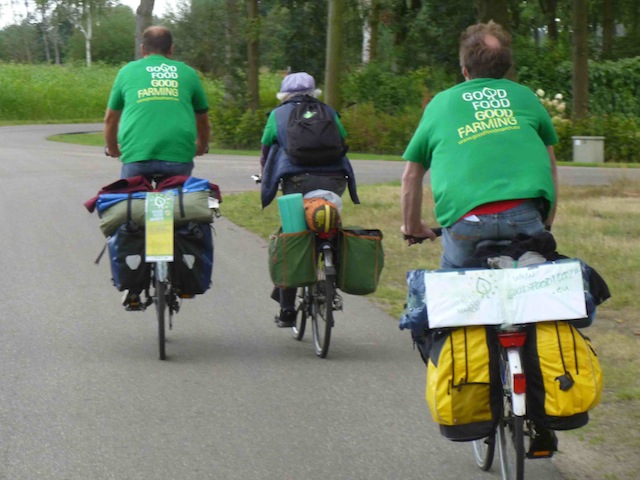 (Brussels, 11 September 2012) The European Coordination Via Campesina (ECVC) is one of the initiators of an unprecedented event, a European march to Brussels entitled “Good Food Good Farming March”.

Member organizations of ECVC, Nyéléni Europe and other civil society groups are mobilizing in European countries to join the march – some by bike, some on foot and some by tractor – and to organize debates and actions.

At the heart of the claims lie fair prices for farmers and consumers, a true respect of the environment, and food sovereignty to bring about good food and good farming everywhere and for everyone.

On September 19, the marchers and civil society organizations will come together in front of the European Parliament to force MEPs into a debate.

For the European Coordination Via Campesina, September 19 will also mark the start of an active mobilization on the CAP reform that will last throughout the fall and 2013, to ensure that Europe makes a real choice in favour of peasant agriculture.

European Coordination Via Campesina demands public regulation of production and markets, a strong capping and greening of payments, only for active farmers and a specific support to small farms.

The future of European agriculture, healthy food and lively rural territories are too important to be discussed solely behind the walls of European institutions and under the influence of agro-industry lobbies.

The time has come to sound the voice of peasant agriculture and of all those who support it.

Some examples of activities taking place in Europe:

– September 14, 11 AM in Bucharest, Romania: Protest and symbolic brunch at the Ministry of Agriculture with members of Eco Ruralis, peasants, gardeners, and conscious consumers and other supporters from all over Romania. Public Discussion with Sofia Gatica. Seewww.ecoruralis.org

– September 15, March Calais-Brussels: 10h30 demonstration atErquimghem-Lys before the headquarters of ramery, promotors of the farm with 1000 cows in Abbeville. In the evening debate in Lille “ A Cap for employment, food and the environment” .www.confederationpaysanne.fr

– September 18, Madrid, Spain: press conference and market with farmers’ products in front of the offices of the European Commission.www.coag.org

– September 19, 10 AM, Vienna, Austria: Peasants’ Protest-Picknick at park along the historical Ringstrasse. Www.viacampesina.at

Several farmer representatives will be present for interviews at the Good Food Brunch on September 19.

For more details on our positions on CAP:

International responsibility of the CAP;

Legislative proposals of the CAP reform;