Home » Not One Step Back 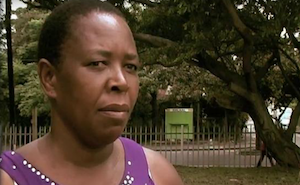 “Climate change is not something which is inevitable, it can be managed, it can be stopped”, Zimbabwan peasant Elizabet Mpofu would say this to any official delegate of an industrialized country at the United Nations Climate negotiations (COP 17) in Durban, South Africa.

She would add something else if she had the chance: “Please can you keep your money and I will keep my land?”.

This was the answer of La Via Campesina’s activist to the question of what she would ask an official representative at the COP.

La Via Campesina organized a march in the streets of Durban as part of what they called “International Food Sovereignty Day to Cool Down the Earth”. Nearly 2,000 people participated in the demonstration.

“La Via Campesina has called for mobilizations in Durban and around the world to demand a change of the entire capitalist system. The fight against climate change is a fight against neoliberal capitalism, landlessness, dispossession, hunger, poverty and inequality.”, reads a press release issued to call the march.

During the demonstration people would chant slogans like “agroecology cools down the planet”, “agriculture is not for sale, food sovereignty now!” and “Yes to Cochabamba, No to REDD”, in reference to the Peoples’ Agreement signed in the Bolivian city in April of 2010 at the World Peoples Conference on Climate Change and the Rights of Mother Earth.

The public protest of La Via Campesina included exposing big transnational corporations like Monsanto, which appropriate seeds through patents and violate peasant rights to use and exchange their own seeds.

Elizabeth Mpofu warned that the new climate patterns are affecting peasant production, many time with totally unexpected and unprecedented events in certain times of the year. She said in October a heat wave affected Zimbabwe causing the temperature to raise up to 40°Celsius, which she had never witnessed in her entire life.

La Via Campesina promotes peasant agriculture and agroecology as sustainable alternatives to cool down the planet. “With our agroecological system we find it very easy to preserve our soils and to produce what we really want”, said Mpofu. Peasants manage to get enough grains for their consumption and for sale despite all the weather events.

Zimbabwan leader admitted that the governments usually fail to implement the peasant proposals, but she said rural workers will keep up their fight. She also criticized the concept of “climate-smart agriculture”, promoted by the UN Food and Agriculture Organization (FAO). She said it is “none sense”. The proposal would include technology and financial packages that especially concern peasants, as it would include new waves of licenses for genetically modified crops and the extension of carbon markets to agriculture.

She shared a reflection with her colleagues of La Via Campesina: “The struggle is ours, no one can come and rescue the Africans, the small scale farmers. We have to unite, we have to struggle until we win”. She admitted it is challenging because they are fighting powerful people, while they are just poor people but she said “we are not going to go back”.