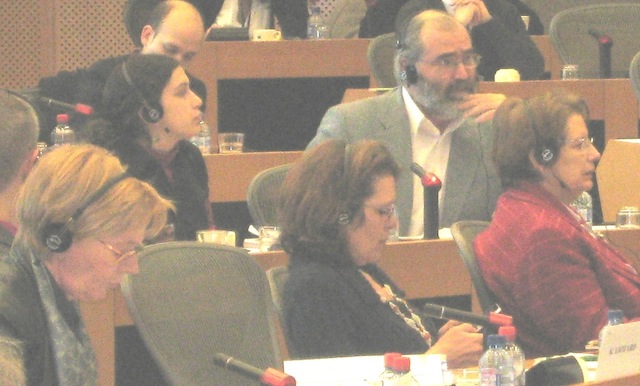 On March 2nd, the political group «European United Left” (GUE), held a hearing on the CAP 2020 in which parliamentary members of the GUE met and discussed with farmers’ organizations, NGOs and other sectors of civil society. Javier Sanchez [1] spoke on behalf of the European Coordination Via Campesina. Here are the highlights of his speech on the future of the CAP beyond 2013:

“We must first establish the policy objectives of the Common Agricultural Policy and then define its instruments, because Europe is in a constant state of structural crisis that requires innovative policy responses.”

“We must begin to thoroughly reform the CAP. The current CAP is centered on WTO policies, but the WTO has become an obsolete organization. “

“The sustainability of the family farming model must be guaranteed through fair and remunerative prices that cover the cost of production. Public regulation of agricultural markets is necessary, but must be flexible for each Member State and for each production sector.”

“Competition policy should be harmonized within Europe, to remove barriers that prevent farmers from negotiating a fair price for their produce in the food distribution chain. And we should favor setting prices within the inter-professional organizations.”

“Small farmers represent the majority of farmers in Europe. They are not poor wretches requiring help! And capping the subsidies is decisive not to harm small farmers.”

“Focusing on the CAP’s second pillar is a mistake, because the percentage of co-financing of each Member State is different, and this would compromise the objectives of European cohesion policy.”

The European Coordination Via Campesina will continue to present its proposals for a new CAP to the European institutions, throughout the process of legislative reform.