Home » Declaration of the Global Convergence of Land and Water Struggles 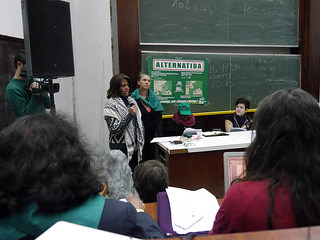 Rights to Water and Land, a Common Struggle

Dakar to Tunis: Declaration of the Global Convergence of Land and Water Struggles (Tunis, 28 March 2015)

We, social movements, grassroots organizations and civil society organizations engaged in the defence of the rights to land and water, gathered in October 2014 in Dakar at the African Social Forum. We are fighting and protesting against natural resource grabbing, especially water and land grabbing of our Commons, and against the systematic violations of the associated human rights. Sharing our ideas led to acknowledgement of the essential linkage between our struggles, given the inextricable nature of land and water grabbing. We met again at the World Social Forum in Tunis in March 2015 to continue this dialogue with movements and organizations from all over the world in order to broaden this convergence.

To date, more than 200 million hectares of land have been grabbed globally by private firms, governments, elites and speculators, often with the support of the World Bank, the International Monetary Fund, the G8 and other institutions and consortiums. The minority’s appropriation of our Commons leads to concentration, forced evictions and the oppression of peoples. This is implemented in the name of environmental protection, the prevention of climate change, the production of “clean” energy, mega-infrastructure projects and/or so-called development, often promoted by Public-Private partnerships, such as the New Alliance for Food Security and Nutrition in Africa. Entire areas and territories are thus dispossessed and local populations evicted, while the loss of identity and ecosystems makes life impossible! Communities whose rights and dignity have been abused find themselves with broken up families, or obliged to become refugees, forced to migrate, lose their rights, and are impoverished and starving. It is estimated that 3.000 persons die each day due to lack of water. The access to and management of spaces of community life are destroyed by military and armed groups that perpetuate war and occupation, criminal State authorities, supported by economic, financial and political elites. This undermines local food systems and many local producers who feed the majority of the world’s population. When people resist they are criminalized, jailed and killed.

The huge profits of elites are thus built on the systematic violation of human rights of the majority of peasant farmers, informal settlement and slum dwellers, fisher folk, pastoralists, indigenous peoples and communities, nomads, rural and urban workers and consumers, especially youth and women, who are dispossessed of their land and livelihoods through violence, intimidation and torture. Land grabbing always goes hand-in-hand with water grabbing, and takes different forms: cases of unsustainable water-consuming farming, through the privatization and management of water utilities (stealing this vital resource from those who are unable to pay for it), contamination of aquifers caused by unregulated mining, the change of river courses and waterways through the construction of dams and the resulting eviction of communities, the militarization of access to water points, the dispossession of pastoralists and fisher communities of their livelihoods through practices such as coastal sand mining.

The criminalization of activists fighting for the protection of the Commons has become widespread, albeit hidden by the authorities. Land and water resources are increasingly scarce, and therefore critical to the security of societies and the sovereignty of States. However, the scarcity underpinning the water, land and food crises is not a given; it is a political, geo-strategic and financial construct.

In response to these threats to our lives and wellbeing, we are fighting back, asserting our rights and providing real solutions. We believe that peoples’ access to and control of land and water is essential to peace, to stopping climate change, as well as to fulfilling fundamental human rights and guaranteeing a dignified life for all. Equal distribution of land and water, and gender equality are central to our vision of food sovereignty, based on agroecology (as outlined in the Declaration of the International Forum for Agroecology in Nyéléni, in February 2015), local food systems, biodiversity, control of our seeds, and respect for natural water cycles. This vision applies to rural, urban and peri-urban populations and includes respectful producer – consumer relationships of mutual solidarity and cooperation.

Our solidarity, grounded in our commitment as activists, is built upon the following principles and convictions that unify our struggles:

We therefore jointly with civil society organisations from around the world,

We call on international governmental organizations, States and Local Authorities to:

We call upon civil society, social movements, grassroots organizations, workers’ unions and NGOs of the world to engage in this discussion, to strengthen this declaration and support its claims by all available means. We need to foster the solidarity of our struggles, including the struggle for our rights to the essential resources required for life, we need to make civil society’s voice heard in the negotiations towards the adoption of the Sustainable Development Goals of the UN Agenda post-2015, in the application of international and regional guidelines on land and natural resources, and the COP 2015 in order to stop climate change.

As we continue to build this convergence, we recognize and appreciate our diversity, and welcome diverse initiatives that are emerging and which we will debate and discuss. To do this we commit to disseminating this declaration widely. We will take it to our territories and communities in order to involve them further in the process of shaping this Convergence.