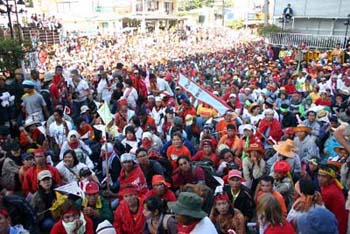 Our Initial Victory
To over 10,000 people from the 11 Thai People’s Alliances against Free Trade Area and Privatization who gather here and hundreds of thousands people awaiting the results of the struggle at home, all sisters and brothers in Thailand and media friends, The 11 Thai People’s Alliances want to declare that we have already achieved our initial objectives.

And this is the first victory of Thai society as we are able to bring to much wider public attention the issues of FTA negotiation and the false promises of the government that the FTA negotiations will not affect people. The future of the administration under Thaksin Shinnawatra is at stake should they fail to answer our call.

Our First Victory
This is the first time that concerns of People Living with HIV (PWAs), patients and consumers on the increase of drug prices as a result of the monopoly by the extension of drug patent duration beyond the World Trade Organization’s provisions; and impacts that will lead to the collapse of small- scale farmers and biodiversity, have been widely reported on front pages and become lead news of various media including radio, television and newspaper. This will greatly expand the space of media coverage of issues which have long been subsided including the conflicts of interest due to a lack of media freedom.

Previously, the process of FTA negotiations has been determined at the sole discretion of the government, food, automobile and parts, and telecommunication industries, which have a close connection with the government. The parliament has completely failed to monitor and review the FTA negotiation even though a number of senators work hard to oppose the FTA especially with the US. This is not to mention members in the House of Representatives, a two-third of which is members of the Thai Rak Thai, the coalition party. The whole parliamentarian mechanisms are looked down by the Thai Prime Minister, Mr. Thaksin Shinawatra, in his recent public statement as having insufficient knowledge to review these important issues.

Our Second Victory
After the first day of the gathering on January 9, Mr Somkid Chatusripitak, Deputy to the Prime Minister, Minister of Commerce and President of the Committee on FTA Strategy said that “as for intellectual property rights, I affirm that any agreement that will make us vulnerable will not be pursued. The Thai PM has made it clear that the issues of drug patents warrant a special attention. If we lose too much, we will fight against that.” In the meantime, Mr Surapong Suebwonglee, spokesman of the Prime Minister’s Office stated that “Mr. Thaksin reiterates that the negotiation has to be carried out chiefly for the benefits of our nation.

We shall not comply with any agreements that will jeopardize interests in any of our products and input from the dissents have to be taken into account by the negotiation team.” We treat this as a promise to people all over the country and we have the press as our witness that the government will not tolerate an FTA deal that will result in monopoly of medicines and the price increase and will not liberalize agricultural market which will badly affect a substantial number of farmers.

This is the initial victory of the 11 People’s alliances. And it is also the victory of the Thai people as a whole. Protesting fellows and every respected Thai people, we would like to declare that by earnest efforts we shall continue to keep watching the future course of the FTA negotiation which will not be concluded until April 2006. This declaration is read on the land that houses the sacred Phra That Doi Suthep Temple Mount and other sacred spirits of all religions.

We pledge to keep a close watch on every single line, sentence and word made in the Thai-US FTA agreements and shall not allow any clauses that will make us lose the nation’s sovereignty, that will make drugs for suffering patients unaffordable and bring about catastrophes to the majority of farmers in Thailand. Should the FTA deal is made and result in such grave damages, the Thaksin’s regime shall be condemned as a liar as they fail to keep the word given to people.

Until then, we, the 11 people’s alliances shall return in full force at the Governmental House. Believe us; the number of people at the next gathering will be ten or hundred times more than the number today. We shall demand and pursue any possible peaceful course of action allowed by the Constitution to achieve our goals. We sincerely thank our sisters and brothers in Chiang Mai who waver their flags to support us during our demonstrations.

Thank you for the water that you gave to our members and thank you to some people who opened their houses and invited us in for water and food and many more. Thai Network of People Living with HIV/AIDS Alternative Agriculture Network Federation of Consumers (Lampang) Federation for Northern Farmers 4 Regions Slum Network, Council of People Organizations of Thailand Assembly of the Poor Student Federation of Thailand Southern Community Forest Network Southern Land Reform for the Poor Confederation of State Enterprise Labour Union FTA