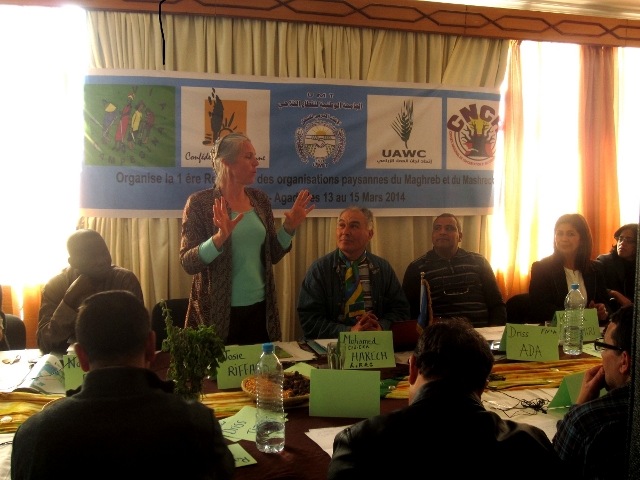 – The Senegalese National Council for Rural Cooperation and Coordination (CNCR)

– The Association of Rural Women and the Fight for Land Association: Tunisia

Met as part of the international peasant movement VIA CAMPESINA at Agadir on the 13th, 14th and 15th March 2014, under the slogan : “For the land and the sovereignty of our peoples! In solidarity and in struggle!”

After having discussed the local, regional and international context, marked by:

Firstly, the escalation of the multidimensional capitalist crisis (food, environmental, energy, financial, economic, institutional, debt and migration crisis) and the governments’ attempts to make the male and female workers of the land and sea (poor peasants, agricultural workers, impoverished fishermen) and all working class groups bear the burden of this crisis. The austerity policies introduced encourage unemployment, poverty, instability and the persecution of immigrants. This at a time when spending on weapons has increased, as have imperialist wars based on rivalry over the division of spheres of influence and the stockpiling of wealth, under the pretext of international legitimacy.

Secondly, the rise in popular resistance and strikes held by the workers of the land and sea in many countries against the repercussions of this crisis, and the beginning of the revolutionary process in Arab and North African regions as a result of decades of impoverishment, tyranny, imperialistic domination and zionist aggression.

After having focussed, in particular, on the food crisis linked to global capitalist speculation on agricultural products, and support of the agrofuel industry under pressure from large agribusinesses, leading a race for the acquisition of agricultural land, notably in the Southern countries.

This food crisis has had a direct effect on the people of the dependent Southern countries because of policies imposed by global economic institutions and the weight of their debts. This is shown in the popular uprisings and movements against the rise in food prices which exploded in 2007 and have continued to rise.

After having studied the consequences of free exchange agreements, which contribute to the destruction of peasant agricultural production all over the world and particularly in the Southern countries, by flooding the market with subsidised agricultural products, and by imposing a model of agricultural exportation which exhausts resources and pollutes nature.

We declare that we will continue to work together to stand up to:

– The neo-liberal choices, imposed by international economic institutions and the governments of imperialist countries, which aim to guarantee the interests of multinationals, and to make the working classes and workers of the land and sea bear the burden of the global capitalist crisis.

– The new neo-colonial strategies and imperialist wars which prevent peace in the world, and which flout the peoples’ rights to political, economic, social and cultural self-determination.

– The patriarchal, capitalist system which incites discrimination and violence towards women.

– The capitalist looting of the natural resources of the earth and sea, which worsens the famines which strike many of the planet’s poor regions.

– The model of industrial agriculture and exportation which worsens the climatic crisis, destroys peasant agriculture and the links of solidarity within the rural world, and exhausts water supplies, damages the earth and pollutes nature.

– The multinational and local representative companies’ policy of monopolising agricultural land and expulsing peasants from their land, the destruction of local seeds, of plant and animal biodiversity and of the genetic, ancestral heritage;

We pronounce the reinforcement of local, national and international solidarity:

– For integral agrarian reform based on the equal distribution of water and land, and agricultural policies which ensure all methods of production and guarantee food sovereignty and respect for the environment.

– With the poor peasants’ struggle for the protection of their lands and their waters against multinationals, with male and female agricultural workers’ struggle for equal pay, with the right to workers’ unions, to collective negotiations and to the improvement of working conditions, and with the fishermen’s struggle against the dominanation of large capitalist companies.

– With the women’s resistance against capitalist oppression and patriarchal domination. To guarantee their dignity, and their right to full and effective equality.

– With peoples’ struggle for their sovereignty and against colonial plans, notably in Africa.

– With the Palestinian peoples’ resistance against Zionist occupation.

The organisations who have signed this declaration support the struggles of the male and female workers of the Land and the Sea in Morocco. They hereby demand that the Moroccan state respect Human Rights, the freedom of political prisoners; the ratification of international conventions and agreements guaranteeing individual and collective rights and freedoms.

They also call for the establishment of collective negotiations with union organisations, an end to constraints on unionism, and the guarantee of the rights of Sub-Saharan migrants, ending racism towards them.

The participants express their support for the peoples’ struggle for liberation, freedom, dignity, social justice and equality. And for a world in which solidarity amongst peoples will reign, and where the exploitation of Man by Man will be eradicated.

The Arabic version of this declaration is available here