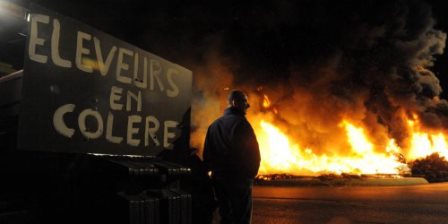 At the height of a crisis that has ruined thousands of dairy producers across Europe, the European Commission has once again chose to delay action, and opted for its usual practice of consultations, evaluations and studies.

Claiming it is part of a larger effort to improve existing legislation, the EC has recently sent out a questionnaire to producer and agricultural organisations, alleging that by inquiring on the benefits and difficulties of the “Milk Package”, the survey will improve its implementation in the field.

ECVC believes that the current crisis of the milk sector and the desperate situation of milk producers demands measures that are well beyond the European Commission’s conventional procedures of postponing decisions due to further studies, evaluations and the convening of experts to analyse what is clear to everyone: the complete failure of the measures contained in the “Milk Package”.

To assess the functioning of the “Milk Package” one only has to look out the window and behold the ruin of thousands of producers across the European Union and the disappearance of milk production in several regions, facts that have been pointed out by many sectorial organizations, including ECVC, after the High Level Group presented its recommendations.

By favoring these narrow studies and evaluations, the European Commission, refuses to question its wrong assumptions that market volatility is inevitable and that the problem lies in the organizational model of production. What’s more, it effectively closes the debate to other solutions, such as the restoring of an effective public instrument of production control that, among other things, assures the continuity of dairy farms – based on sustainable models- in all European territories.

ECVC believes that it’s high time to conclude and recognize, not to carry out further studies; not evaluate, but to take action for efficient tools of public regulations in order to maintain decent prices and fair incomes for dairy farmers, as well as to allow the control and adjustment of European production.