Demonstrations, Street Theater and Protests at the German Breeders’ Association in Bonn
Records from a German Seed Bank are Given Back to Farmers from the South
Via Campesina Protests Against the Absence of Farmers’ Voices in Agricultural Biodiversity Day 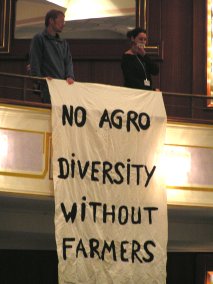 As the delegates to the ninth Meeting of the Parties to the UN Biodiversity Convention (CBD) in Bonn, Germany, arrived on the morning of May 19, they were confronted with an energetic group of protesters. Members of Via Campesina and other allies from Germany (BUKO Campaign Against Biopiracy), Belgium and the Netherlands (A SEED) joined forces to urge delegates to consider the consequences of promoting agrofuels and green revolution policies whose consequences have been the eradication of small farmers, environmentally damaging monocultures, soil erosion and global warming. To the rhythm of A SEED’s samba drummers, they shouted slogans that denounced Germany’s deal with Brazil for the massive production of Agrofuels.

As delegates, NGO members and other observers to the meeting entered the convention center, they handed out written information in which they reasserted small farmers’ essential practices in preserving biodiversity. A few hours later, Via Campesina also reiterated its refusal to participate in the privatization of natural resources, including patenting or otherwise restricting their access to seeds. In a speech in the plenary room of the CBD, Jose Oviedo, a farmer from Costa Rica, demanded that Farmers’ Rights be considered as an essential part of preserving biodiversity, by guaranteeing that the production, exchange and control of seeds are in the hands of communities, not private corporations.

Later that same day, 50 demonstrators gathered in the center of Bonn in order to march to the offices of the German Plant Breeders’ Association, a group that strongly represents the interests of large seed companies such as Bayer, Syngenta and Monsanto. Demonstrators criticized the promotion of genetically-engineered varieties and their lobbying efforts for even stronger protection through patents variety protection measures. They also denounced the Associations’ demand of payments for re-harvesting registered seed varieties. The demonstration was organized by the International Committee for the Rescue of Wheat, the Action Network COP 9 and Via Campesina.

Afterwards, a street theater or mistica was performed in one of the city’s central squares. Starring famers and bio-pirates, the performers conveyed to the public the consequences of privatizing seeds. In the play, biodiversity thrives on small farmers’ exchange of seeds until it is threatened by pirates who want to commercialize it, making it available only for the development of patented seeds they will now sell to the farmers. Biodiversity is captured and locked up inside a seed vault, in the freezing island of Swalbard, Norway. But as farmers get organized they manage to organize against the swindling biopirates and fight them back by refusing their seeds. A video of the play was filmed by Belgian friends of Via Campesina from A SEED:

The first day of the UN Convention meeting was concluded with a ceremony initiated by members of the European Cooperative Longo Mai in northeastern Germany. They had gathered the records of one of the largest genetic banks in Europe in Gatersleben. Gatersleben also has an institute on genetic crop research using the thousands of varieties gathered there for hundreds of years. These seed varieties came to the bank in from countries such as Ethiopia, India or Mexico, for each of which thousands of plant varieties are registered in the bank. In a ceremony, farmer’s gave each other back the certificates listing the seed varieties stored here in Germany.

Later during the week, members of Via Campesina were also recognized in the “Cog Awards”. The word “cog” refers to ships that used to be built strongly in order to prevent attacks from the pirates of the seas. The award, donated by ETC group, referred instead to strong movements fighting against new-age pirates who are involved in the appropriation of native plants and knowledge developed by peoples or farming communities with the intent of commercializing them. The Cog Awards thus recognized the Landless Workers’ Movement in Brazil (MST) in their fight against the illegal GM trials by the international company, Syngenta. In October 2007 Syngenta hired a private militia to violently expel MST members who were occupying the experimental fields. In their attack, they were responsible for the assassination of Valmir Mota de Oliveira, known as Keno.

Finally, before leaving Bonn, Via Campesina members hoped to participate in the International Day of Biodiversity, celebrated on May 22. Although Via Campesina had asked to speak at this celebration, its participation was denied, giving instead priority to voices such as the mayor of the city of Bonn. In response, Via Campesina planned an action of protest. It handed out a statement to all the present delegates, affirming that small farmers’ practices are essential in the preservation and development of biodiversity. They insisted that farmers’ practices and local agricultural production must be part of the solution in the face of the ongoing food crisis. After passing out the papers that expressing this position, they disturbed the ceremony by rolling down two giants banner that read, “no agro-diversity without farmers!!” and “nature for people, not for business”. The protest action was done to express that it is not acceptable that agricultural biodiversity is discussed without taking into account farmers voices. Although farmers’ participation was denied, the CBD secretariat had proposed the day before that they would offer 220.000 USD to business representatives in order to enhance their participation in the Convention for Biological Diversity.

Via Campesinas’ statement can be found here in English (also available in French and Spanish on www.viacampesina.org.