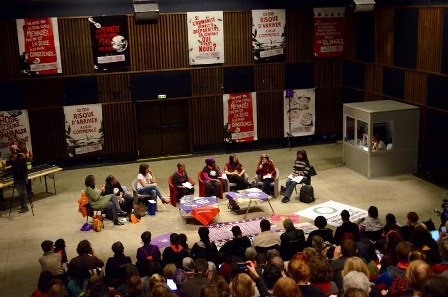 (Ramallah, January 2016)- the Union of Agricultural Work Committees, within its participation in COP 21, which was held in Paris in December 2015, confirmed that Climate Change’s effects on Palestinians are double because of the Israeli occupation’s theft of our natural resources.

Hiba Al-Jibeihi, UAWC’s advocacy coordinator, had the opportunity to network with various delegations, and mainly, gave a speech about Palestinian’s current situation, related to the climate problems that everybody is facing. Indeed, Palestinians farmers are suffering from the rising temperatures like everybody else, but their situation is way worse if we take in consideration the small amount of available resources that they have left. Thus, this speech explains daily life of Palestinian agriculture, and specially tackles gender equity issues from the perspective of performativity theory.

She also explained the UAWC’s role in addressing climate change issue, and strengthening the steadfastness of Palestinian farmers, especially female farmers. Pointing out that Palestinian suffering is similar to the World suffering, with a suggestion that we have to cooperate all together to solve all the world’s poor sufferings.

This participation highlights the fact that UAWC continues its struggle with its main partner La Via Campesina to protect the farmers and develop policies to mitigate climate change effects on them.