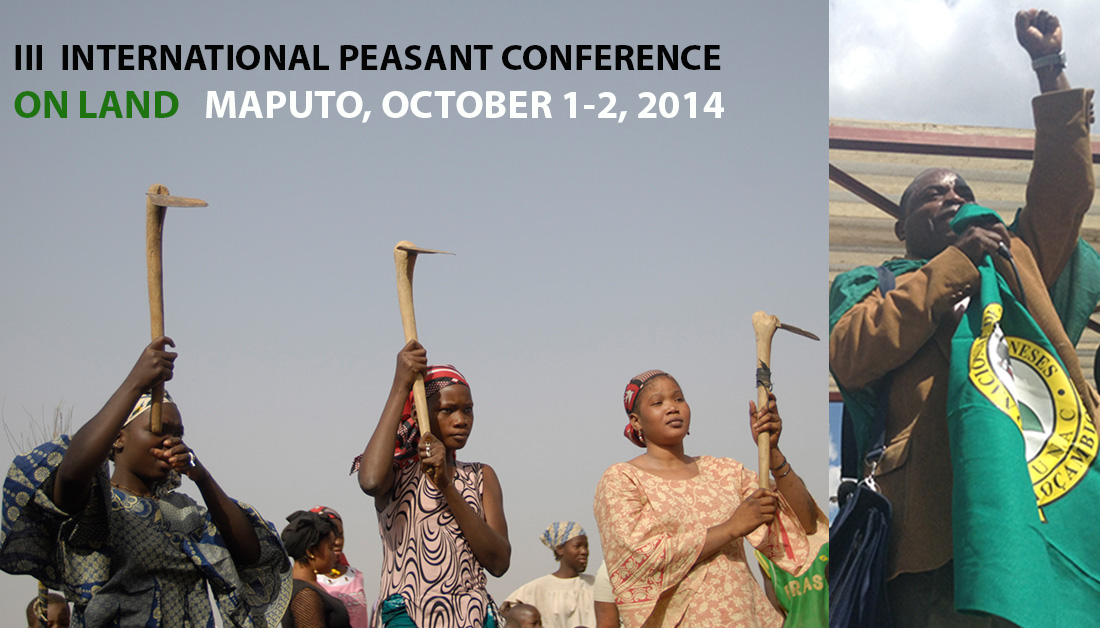 UNAC (União Nacional de Camponeses), Mozambican Peasants’ Nation Union is hereby inviting organisations and peasant movements around the world, as well as activists, scholars and individuals interested in the issues and challenges of the peasantry, to participate in the III International Peasant Conference on Land held in Maputo, Mozambique.

UNAC, was founded in April, 1987 and registered in 1994 with the overall aim of representing the peasants and peasant organisations while ensuring their social, economic and cultural rights through strengthening its organisations, participating in shaping governmental public policies and development strategy, in order, to guarantee food sovereignty, while considering youth and gender equality.

These last years, Mozambique has been a major stage for investments of various kinds resulting on the increasing pressure on land, casting challenges for all different actors involved. It is based on this context that UNAC has been organising since 2012 the International Peasant Conference on Land and Seeds. These events contribute, on one hand, to the capacity building of peasants and small-scale farmers for a better management of land, natural resources and the protection of their rights. While on the other hand, it contributes to the deepening and broadening of the public debate regarding the structural challenges the agricultural sector is facing taking into account the need of a land reform – one which is genuinely Mozambican and inspired by the experience of the global peasant struggles.

Thus, UNAC hopes that the International Peasant Conference on Land and Seeds can be an interactive space for dialogue, sharing and exchanging patterns of struggle and forms of resistance. Hence, enhancing and strengthening the struggle of peasants worldwide while improving the struggle for land, seeds and peasant means of production, and ultimately aiming for agrarian reforms and food sovereignty in peasants’ respective countries.

Interested participants are invited to fill in this online registration form.

Please be informed that the expenses for flights, food, accommodation and local transportation during the conference will be fully covered by the participant. However, UNAC can assist in finding the most affordable options.

The programme will be sent in the upcoming days.