The Forum opened yesterday with a presentation by Oliver de Schutter, United Nations Special Rapporteur on the Right to Food. Olivier was optimistic in his presentation about the new architecture for global governance of food security, which makes the Committee on World Food Security (CFS) its central figure.

The reform of the CFS will help to overcome the previous lack of coordination between different actors, which left control of decisions in the hands of State Governments alone, through the one country-one vote mechanisms of the UN FAO. The new FSC should define clear guidelines in which – and this is the great novelty – civil society, the private sector, and other international institutions can participate. Olivier warned the civil society forum of the need for constant vigilance, to ensure the implementation of the approved  political guidelines. The Rapporteur stressed that the management of financial funds will mostly fall to the World Bank, which demonstrates a complete lack of connection between those who set out the guidelines and those who will be empowered to put them into practice. It is precisely the World Bank that, through pushing neoliberal policies, has generated so much world poverty, particularly in the rural sector. 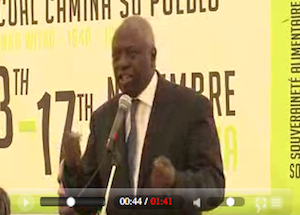 Professor de Schutter explained that the of the major mistakes made over the past 25 years has been the marginalization of the men and women engaged in small-scale production, traditional fisher-folk, rural women, rural youth, rural workers, pastoralists and indigenous peoples. Building Food Sovereignty relies on the democratization of decision-making processes that affect the rural and smallholder-farming worlds. As these spaces are opened up, as Professor de Shutter hopes, it will create the need for efforts on the part of civil society to organize themselves and participate. The construction of a diverse Forum like the one we are participating in, demonstrates the will and the capacity exists to bring this about.

Before continuing with dialogue with the participants in the Forum, Olivier conveyed the importance of first-hand information from the people producing food in order to be able to develop his role of  “revealing of uncomfortable truths”. The audience went on to provide him with a great number of these truths.

At the end of the meeting with the Rapporteur, most of the participants in the Forum took part in an unusual ceremony. On one of the seven hills of Rome, in  the  Campidoglio square, representatives of different indigenous peoples called on Mother Earth, ancestors and the creators, for the wisdom to “heal” our planet, the Earth of our descendents. In one corner the Sub-director of the FAO and the City Council President  attentively followed the mistica.