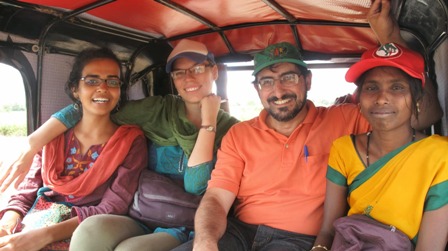 (India, January 16, 2015) In the past year, LVC India built solidarity through three knowledge exchanges with our comrades from the Landless Workers  Movement (MST), in Brazil. This came as a beneficial follow-up to our work in 2013 (see story here about the trip to Bihar shared with Karnataka Farmers).

In March, we hosted Adalberto “Pardal” Martins for ten days traveling throughout Andhra Pradesh, Telengana, and Karnataka. Pardal is a long-time member of MST, and has contributed in many areas, including the organization of production and cooperatives, agroecology, and political training. His visit occurred at the timely juncture of the political division of Andhra Pradesh into two states – Andhra and Telengana. Telengana was born of a historical struggle for land against feudal landlords, one of many commonalities with the narrative of the Landless Workers Movement of Brazil.

The conflict over land and the potential of capitalists’ vested interests to dominate in the political vacuum in Telengana was a hot debate, and as Pardal met with pastoralists, adivasis (indigenous peoples), and small and marginal farmers who are members of Via Campesina ally Food Sovereignty Alliance, he asked them a provocative question – “Why don’t you just take them? The lands, why don’t you just occupy them and take them?”

“We will seize the lands, if we don’t get justice!” responds a young pastoral activist, whose grandparents fought in the 1942 armed rebellion against the Nizam. “Today the Telengana political leaders speak of massive capital investment as a positive future, but as shepherds our struggle is for our common lands and resources, not the same path of capitalist growth.”

“Though rivers flow through our lands, we get none of the water,” adds an Adivasi (indigenous) activist. “We are denied rights to our forests and resources. Whether there is one new state or one million new states, we just want autonomy over the natural resources and right to protect the forest. Our struggle is not just for our land but for the Mother Earth and the humanity of the world.”

Most visitors would ask the activists why they don’t they seek legal forms of redress, or take to the streets with banners, or invoke UN Conventions in order to put forward a strong voice in the new development of their state. But Pardal goes directly to direct action: occupy, resist, produce. This is a method that he has seen tried and tested in his home country of Brasil. He has been a member of the Movimento dos Trabalhadores Rurais Sem Terra (MST) or the Landless Workers’ Movement for over twenty years. MST is a movement which organizes peasant families to occupy unproductive and private lands which fail to meet their social purpose, as legally provided for in the constitution. Since MST was formed, 30 years ago, 420,000 families across 24 states of Brasil who have won land through the struggle and have organized into cooperatives.

But despite the differences in the scale of the organizations and their contexts, Pardal can’t find anything but commonalities: “It amazes me how common our struggle is, how common our enemies are, how common our vision is. These are all struggles for food sovereignty – be they of landless farmers in Brazil or by dalit (so-called “untouchable” castes), adivasi, farmer, and pastoral sanghams in India.”

This is Day One. By Day Ten, Pardal finds himself even more convinced. In the nine days between he met KRRS activists near Channapatna, Karnataka who have been fighting against the granite mafia for 30 years. On an early morning visit to see milk collection among members of a dairy cooperative in Madanapalli, he addressed their first question, “What’s the status of the Indian cows Brasil has done research about?” After a tour of the production houses of Dharani Cooperative, based at Timbaktu Collective and owned by 1800 farmers, certification processes were compared and debated. He also contributed to an exchange of the status of GMOs in Brazil and India at Economics of Happiness conference. (click here to see photos of Pardal’s visit)

In November 2013, Kannaiyan Subramaniam, a farmer activist from Tamil Nadu, had the opportunity to continue the conversation with MST while visiting Sao Paolo. He went to the Acampamento Serrana (Serrana Camp), near a small town called Ribeirão Preto. The land was occupied when a sugar factory went bankrupt. The Camp Kannaiyan visited is 1817 hectares, occupied by 350 families. It has been occupied 8 times, and each time with forced evictions, following which they regroup and return with a new strategy for occupation. It is still in an insecure state.

Kannaiyan observed the differences between Brazil and India: “Throughout Brazilian history there was always land concentration, monoculture, plantation, high technology and international-capital intensive agriculture. Unlike in India, in Brazil agriculture has been developed without people but with capital and technology (machines). Banks + media + international finance + technology + machines + government is the equation for agriculture in Brazil. A huge amount of people were evicted from the land and migrated to big cities. Few people stay in the countryside, yet those who live in the cities also don’t have quality of life.”

India has a very strong history of peasant-based farming and high productivity in peasant-controlled farms, though with such a huge population land holdings can be very small and are rarely held by women and those outside of the traditional farmer castes. In some cases, in the MST occupied places, the people aren’t traditionally farmers – their families have been expulsed from the countryside generations ago. They have fertile lands but aren’t meeting their maximum production. An exchange programs for them to learn about farming in India could definitely help the MST settlements to improve their production, Kannaiyan suggests. But there’s a lot for Indians to learn there too:

“MST is a very strong movement with a strong sense of training. Training creates a very strong cadre and leader base for MST, and involves youths, which are largely missing in leadership structure in Indian movements. There are hundreds of thousands of ideologically and practically committed people. This is what really impressed me. They are using nonviolent struggle, in every level of debate. They are committed for a total systemic change.”

In his visitas Kannaiyan was also able to visit another settlement, Maria Lago, which had 600 families on 1,700 acres, Smack in the middle of a “sea of sugar cane monoculture”. This settlement has met legal peace despite police conflict in 2004 and 2005, and is now is producing agricultural products of agrarian reform.Kannaiyan also visited the Escola Nacional Florestan Fernandes, and you can find his analysis of his visit here.

A final linkage with MST occurred in October in Kerala, when Alex Yoshinori Kawakami spent a few days exchanging with youth activist Sabina Yasmin after an international program on agroecology hosted by a team of international NGOs and Indian NGOs. Sabina Yasmin, activist from the Bangladesh Kishani Federation (largely a landless peoples’ movement) came to India for a month of technical training, language immersion, and political exchanges. Sabina and Alex toured some of the agroecological farms of Kerala, observing firsthand the negative impacts of switching from local seeds to hybrid seeds in adverse weather, the possibilities for small-scale mechanization, and the agricultural realities of Kerala. Though just for a few short days, exchanges such as these bring immense richness to the struggle for food sovereignty.

In 2015, LVC South Asia plans to build solid pathways between MST and Indian farmers’ movements – there is much to be shared between us. Methods for participatory training and agroecology are the need of the hour as we launch our first agroecology school at Amritha Bhoomi in Karnataka. Indian expertise in small-scale yet productive agriculture (seen through methods such as Zero Budget Natural Farming) along with Indian traditional medicine and Indian theories of nonviolence are of interest to MST. We intend to exchange delegation of farmers from South Asia to MST to implement this program, and look forward to a fertile future.