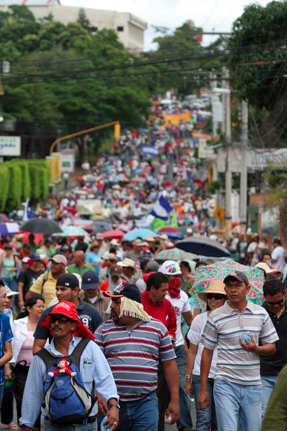 As a response to the big national march of the National Front of Resistance Against the Coup, which lasted seven days and had a participation of thousands of people from all corners of Honduras, the coup gang, headed by Roberto Micheletti has unleashed a brutal repression against the leaders of organizations which form part of the front, against women, teachers, students and against the people in general.

Once the march had culminated in Tegucigalpa and San Pedro Sula, last August 11, and at the same time in which many parts of the world solidarity actions were taking place under the framework of Global Day of Action for Honduras, convened by La Vía Campesina, the usurpers set into motion the mechanisms of violence and repression to try to stop the heroic Honduran popular struggle.

That same August 11, taking advantage of a couple of isolated acts of vandalism, the army and the national police began to beat and detain protestors.

Form that day on, the repression has increased.

Yesterday, August 12, a group of 30 thousand people had gathered at the National Pedagogical University to begin a peaceful march towards the National Congress when they were attacked by repressive forces. Many were beaten and detained in the inside of the university. Others were attacked through the march at a short distance from Congress. The repressive forces used tear gas was launched directly and from a short distance at the faces of the protestors. They also used shields to beat men, women and elderly. Also, there were rubber and real bullets shot. Those who were detained were brutally beaten.

The protestors were transported to receive medical attention by their own comrades. Some are in critical condition. 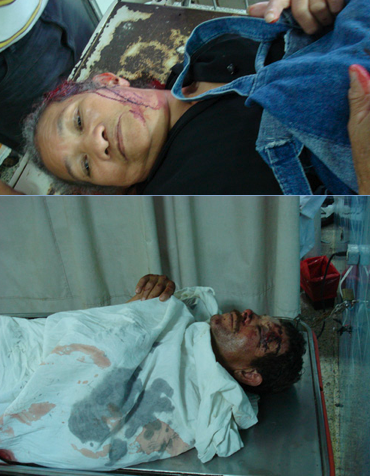 On the other hand, there were a great number of people arrested. Today it was informed that the pro-coup have decided to bring criminal charges against 25 of those detained, which some are peasant and indigenous people.

At night, a group of unknown people shot up the offices of La Via Campesina in Tegucigalpa. La Vía Campesina of Honduras is one of the organizations driving the National Front of resistance Against the Coup. Its leader, Rafael Alegria, whom has already been jailed a couple of weeks ago and was set free thanks to public pressure, finds himself in the crosshairs of the coup and has been threatened.

It is important to note that the repression has taken place not only in Teguscigalpa, where the most important massive mobilizations of this, now in its 46th day, popular struggle against the coup have taken place and demonstrated to the coup leaders and the rest of the world the determination of the people of Honduras.

Today?s march also suffered repression. A Congressional representative, Marvin Ponce, was assaulted by the repressive police. The beating was so brutal that it left him with several fractures, one in his right arm and the other in his leg. He has had to receive surgery due to the critical injuries he sustained.

Today?s march was harassed by a great number of menacing soldiers and police whom took any opportunity to attack the people. Also, the despotic coup faction has been infiltrating agents provocateurs within the marches.

The popular struggle can no longer be contained and it is cornering the coup faction, reason why they have responded with violence. The repression increases as the Honduran people struggle advances and gains strength. Only a broad and permanent international solidarity can stop this wave of repression.

On the Global Day of Action for Honduras we gave a great example of committed solidarity with the people of Hodnuras. Now it is time to deepen this solidarity so that the Honduran people may defeat the coup and advance towards popular democracy.

How do we support the struggle of the Honduran people?

JOIN THE STRUGGLE OF THE PEOPLE OF HONDURAS THROUGH THE MOST POSSIBLE BROAD AND CONCRETE SOLIDRITY!
STOP THE REPRESSION!
DOWN WITH THE COUP AND PUNISH THOSE RESPONSIBLE FOR IT!