Home » Brazil: MST asks for more Land Reform and for a stop in the criminalization of the Movement 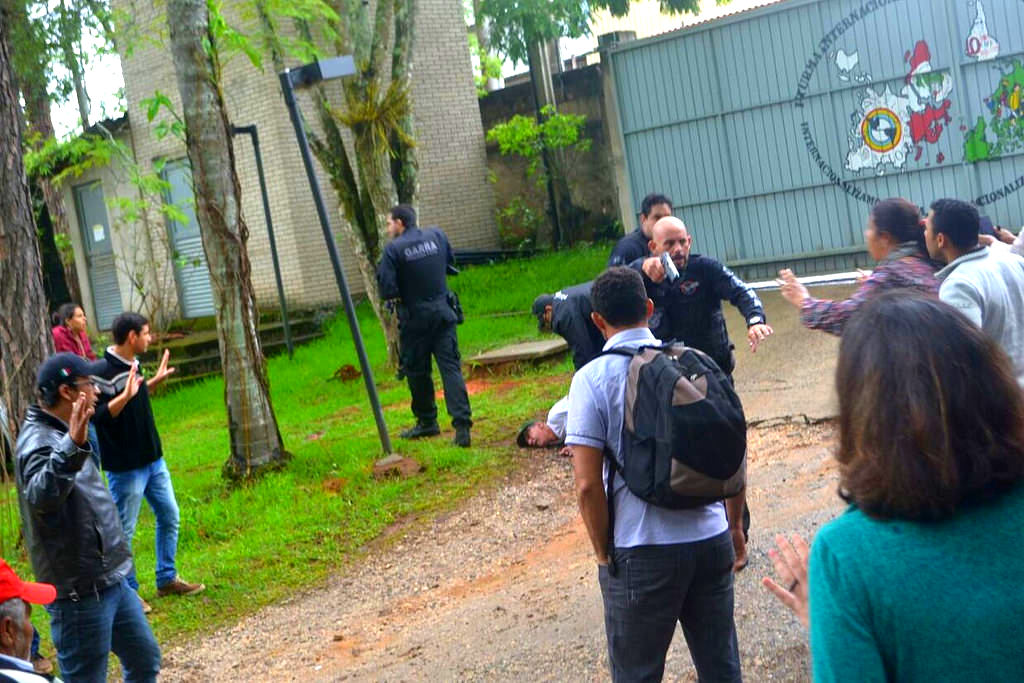 (November 7, 2016) MST Denounces an “escalation in the repression of the struggle for land, dominated by the interests of agribussines allied to the violence of a State of Exception”.

On Friday, November 4th, MST was on the criminalization spotlight. A violent action by the police, codename “Castra”, spanned three States, Paraná, São Paulo and Mato Grosso do Sul. The main target of the operation was to arrest and criminalize leaders from two camps held by militants in Central Paraná State. The camps are named “Dom Tomás Balduíno” and “Herdeiros da Luta pela Terra” (Land Struggle Heirs).

On a note, MST denounces a “surge in the repression of the struggle for land, dominated by the interests of agribussines allied to the violence of a State of Exception”.

“We remind the public that we have always acted in an organized and peaceful manner for the advancement of Land Reform. We reclaim the land for it’s social function and that it be destined to settling the 10.000 families that are currently camped in Paraná State.”

In São Paulo, 10 vehicles from the Civil Police broke into the National School Florestan Fernandes (ENFF), in the town of Guararema. Two militants were arrested.

According to the reports, police officers arrived at around 9:25 am, closed the school gate and jumped over the reception window,  taking shots aiming at sky. The shards of collected bullets prove that none of them were rubber, but lethal.

In Mato Grosso do Sul, three police vehicles with Paraná plates broke into CEPEGE, “Geral Garcia” Research Center and Professional School, in Sidrolândia. The police operation was searching for MST militants from Paraná that allegedly were there. The police remained there until approximately 9AM, when they left with no arrests. During the operation, police prohibited the use of mobile phones.

Militants that were in CEPEGE at the moment were performing cleaning and maintenance tasks.

Here is the full note:

More Land Reform and a stop to MST criminalization

Once more the Landless Rural Workers’ Movement is a victim of criminalization constructed by the repressive apparatus of the State of Paraná. The violent operation, codename “Castra”, took place this Friday, November 4th 2016, in Paraná – municipalities of Quedas do Iguaçu, Francisco Beltrão and Laranjeiras do Sul; and also in the States of São Paulo and Mato Grosso do Sul.

The aim of the operation is to capture and criminalize leaders from ‘Dom Tomás Balduíno’ and ‘Herdeiros da Luta pela Terra’ encampments, located in the central region of Paraná state. Until now 6 leaders were arrested and they are still looking for other workers, under several accusations, including criminal organization.

Since May 2014, approximately 3,000 encamped families are occupying areas that were before occuppied by Araupel Company. Those areas were illegally occupied by the company and because of that the Federal Court of Public Land declared that they belong to the Union, so they must be devoted for Agrarian Reform.

Araupel Company became a powerful economical and political empire by illegally occupying public land and constantly using violence against rural workers and peasants that occupy land, many times acting in collusion with the civilian and military police apparatus, they have even fund political campaigns of public authorities, like the one of the Chief of Staff of the Beto Richa’s government, Valdir Rossoni.

We highlight that this action is part of a continuous process of persecution and violence that MST has been facing in several states and in Parana. On April 7th, 2016, in the land illegally occupied by Araupel Company the families organized in the Dom Tomas Balduíno encampment were victims of an ambush made by the Military Police and security personnel hired by the company. In the attack, were there more than 120 gunshots, Vilmar Bordim and Leomar Orback were executed, there were also countless people bullet wounded. In the same large state in 1997, gunmen hired by Araupel killed in another ambush two Landless Movement workers. Both cases remain unpunished.

We denounce the escalation on violence and repression against the struggle for land, where agribusiness interests associated with the violence of the State of Exception predominate.

We remember that we always act in an organized and pacific way so the Agrarian Reform advances. We demand that the land fulfills its social function and that it is destined for the settlement of the 10,000 families encamped in Paraná.

We keep fighting for our rights and we join those who fight for education, health, housing, more rights and more democracy.