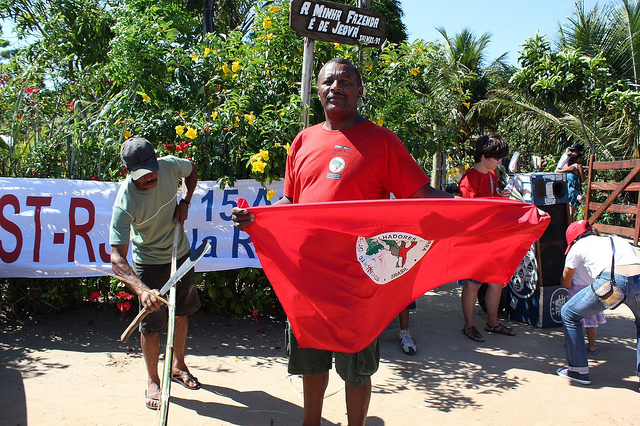 Cícero Guedes, rural worker and activist of the Landless Rural Workers Movement (Via Campesina) of Brazil, was murdered by gunmen on Friday, January 25 near the Cambahyba sugar-cane field, in Rio de Janeiro state, while riding his bicycle.

According to the official announcement of his murder in MST’s website, Cicero was a sugarcane worker in Alagoas and was part of the Brava Gente settlement. He was struggling in favor of the agrarian reform as coordinator of the occupation in the Cambahyba sugar cane field, a complex of seven farms covering 3,500 hectares.

The Brazilian government declared this an unproductive estate in July 2012, but in addition its history is linked to the military dictatorship in that country, since the bodies of political prisoners were burned in that field, said leader Marcelo Durao to Real World Radio.

Cicero was an expert in agroecology development, he defended biodiversity and was aware of the importance of it, he was also a teacher for the settled families.

The complex of lands that are part of the Cambahyba field have been a stage for all kind of violence, from child labor, slavery, violation of labor rights, in addition to environmental crimes.

The National Agrarian Reform Institute (INCRA) has committed to create a settlement in the area, although so far it is no more than a promise.

Marcelo Durao explained that Cicero was shot at least 10 times and blamed directly the large estate model for the loss of this landless leader.

Durao said that there are currently 70 families settled in the field and linked this cruel murder with other actions that are currently taking place in the region, from the building of a megaport in Porto de Açú, the promotion of agroecology, the land struggle, etc.

The MST leader denounced the existence of several violent focal points in the region and highlighted the international solidarity received after Cicero’s death.

When this new murder was announced in the framework of the struggle for an agrarian reform in Brazil, in Chile, where several of its representatives attended the Summit of the Peoples, the Latin American Coordination of Countryside Organizations – Via Campesina expressed its solidarity with the relatives of Cicero and his organization, the MST.

“Sadly, the action of gunmen and paramilitary officers is a common practice in the continent, where landowners, agribusiness and transnational corporations operate favoring organized crime, since this violence is functional to the privatization of nature, the concentration of land and the production of food”, said CLOC-VC.

And at the same time they demanded the authorities “to take adequate measures to ensure the safety of Cicero’s family and friends, and implement investigation mechanisms that ensure that the authors are tried and sentenced”.

“The violence that emerges from the landowner power can only end when the Integral Agrarian Reform becomes true”, said CLOC.