Home » Bolivia: La Via Campesina participates in the inauguration of the Peoples’ climate conference 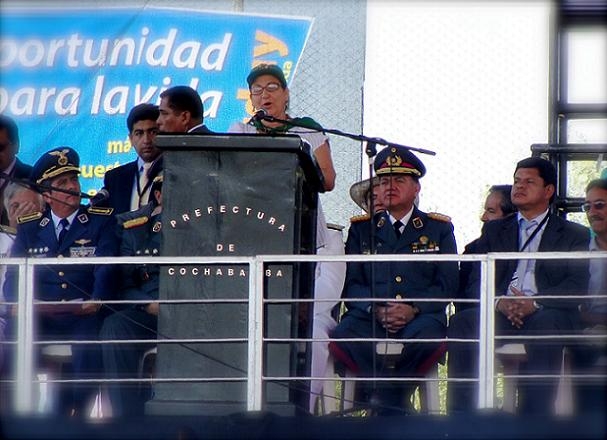 (Cochabamba, April 20, 2010) This morning Itelvina Masioli, a Brazilian leader of the international peasant movement La Via Campesina, spoke at the inauguration of the People’s World Conference on Climate Change and the Rights of Mother Earth. Bolivian President Evo Morales was the keynote speaker to the crowd of several thousand.
The conference, organized by the Bolivian government after countries failed to agree on a plan to stop climate change in Copenhagen last December, is being held from April 19 thru 22. Its goal is to amplify the voices of those who were not heard in Copenhagen.
“We are here together with President Evo Morales to play an active role in this grand global mobilization in Defense of Mother Earth,” said Masioli. “Our planet is in danger, and if our planet is in danger, then life is in danger.”

“We assert that we need to change the system and not the climate,” continued Masioli. “We assume the construction of another project: the project of life. A project based on principles that defend life, the Mother Earth, and that is based on another model of social, economic, political and cultural development. That is why we are here. “

The invitation to La Via Campesina from the Bolivian government to speak at the inauguration symbolizes the importance that the movement has gained since its founding in 1993 as a global voice for peasants and small farmers. Masioli is one of 300 delegates from La Via Campesina who are attending the conference to send the message to the world that diversified, sustainable peasant agriculture can cool down the planet. 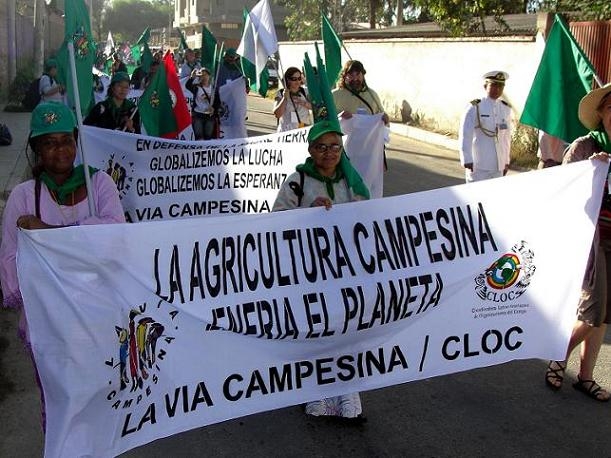 “As peasants of the world, we want to reaffirm our promise and commitment to defend Mother Earth,” said Masioli. “We believe that the real solutions to all of the crises in this historic moment in which we live are solutions that need to be based in integral agrarian reform and food sovereignty as a principle and as a right of the peoples.”

At the end of her speech, Masioli presented as a gift to Morales the flags of La Via Campesina and the Latin American Coordination of Peasant Organizations (CLOC). “We are going to give our flags of La Via Campesina and CLOC—our most powerful symbols—because President Morales was one of the founders of these two important peasant articulations in Latin America and the World, and because no one else has the credibility to convene this conference.”