Finds out that farmer had not been given information on the trial in his land;Ensures that DBT guidelines are followed by the company. 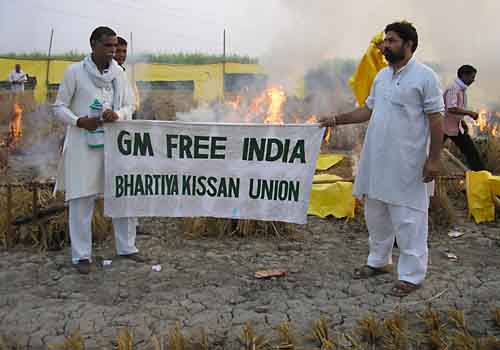 Karnal, October 28, 2006: Activists of Bharatiya Kissan Union [BKU] and scores of villagers of Rampura village in Karnal district of Haryana destroyed a GM Rice plot in Haryana to prevent contamination from the rice plot and to ensure that DBT guidelines are not flouted. Included amongst them is Paramjit Singh, the farmer on whose land Mahyco is doing the trial but who has not been informed about what is being tried out on his land and the Sarpanch of the village, Mr Syamlal.

The BKU activists who went to investigate the trial in Rampura village found out that the farmer, who had leased out his land to Mahyco for Rs. 15,000/- for two acres had not been informed by the company about what kind of seeds are going to be sown on his land. Similarly, the panchayat head has not been given the full details of the trial.

“The way trials are conducted in the country is about playing with the  ignorance of the farmers as this case shows. Given the unreliable track record of the company and the regulators in preventing contamination from the trial plots into the supply chain where unwary consumers are eating untested products, we had to ensure that such a  thing does not happen from this trial. This is all the more dangerous in a basmati-rice growing belt of the country. We have now ensured that the DBT guidelines regarding destruction of GM plant material in the trial are not flouted”, said Mr Rakesh Tikait, spokesperson of
Bhartiya Kissan Union.

GM trial plots have become the biggest source of contamination all over the world and regular scandals about untested and uncleared [by regulation] products entering the consumption chain have become routine now. Recent scandals include GM rice contamination in the US and China. India also witnessed several contamination scandals in connection with GM crop trials including the illegal proliferation of Bt Cotton much before the regulatory authorities allowed its cultivation. Civil society investigations have pointed out again and again that material including seed material is allowed to get into the supply chain due to lax or even absent monitoring of trials by the  regulators.

Mr Gurnam Singh, President, Haryana unit of Bhartiya Kissan Union stressed that given the economic and trade potential of Basmati rice from this belt, it is disastrous for GM rice trials to be conducted, that too secretively.

More than 500 farmers, including many farmers from Rampura congregated at the trial site and demanded its destruction. 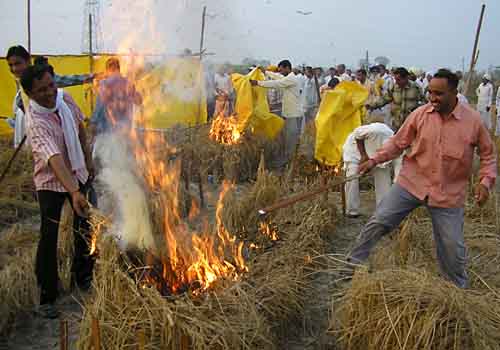 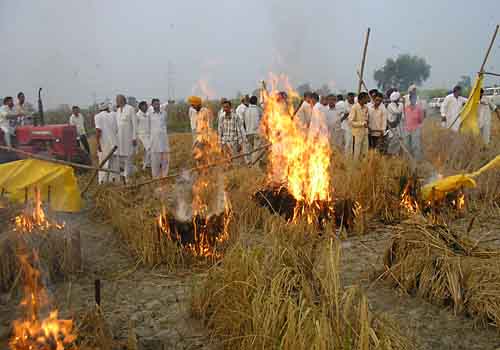 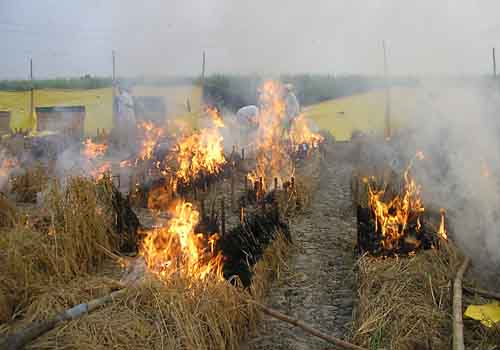