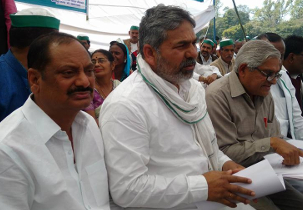 They also demanded that farmers arrested from the protest site be immediately released.

Kanpur, India: Since 21 November 2016, farmers in Lahurmau village of Kanpur, whose lands were acquired to build a Nyveli-owned thermal power plant, have been staging an indefinite strike by the banks of Yamuna river.

These farmers from neighbouring eight villages allege that the construction at the site have already begun even before they have received compensations for their lost land and livelihoods. Nearly 1850 farmers in these villages are directly affected by the power project.

The ownership of the acquired land had already been issued to the power plant. While the planning for the project had begun at least four years before, apart from a few farmers most of them allege that they have not received any compensation so far.

In these four years, none of these farm families have been able to cultivate in their land, leading to loss of livelihoods and considerable fall in their farm incomes. Farmers have been forced to take to the streets in protest. The project plan which came about during the term of the previous Central government, was pushed forth under the pretext that the affected farmers would be compensated four-times the market rate of land in the region, considering the permanent loss of livelihoods and farm incomes. When the new government came to power in 2014, it took the implementation of the project forward, but farmers’ demands remained unmet. In the meantime, farmers allege that there have been massive discrepancies in ascertaining the compensation amount from what was agreed initially. They also accuse the plant owners for providing inadequate compensation to some farmers before the land prices were expected to appreciate.

Worse, some of the protesting farmers like Niraj Singh Rajput and Vishaka of Bharatiya Kisan Union were arrested by the police in January, false cases slapped and jailed. Visakha, was arrested in the absence of any woman police official and farmers accused the administration of high handedness in dealing with the issue. 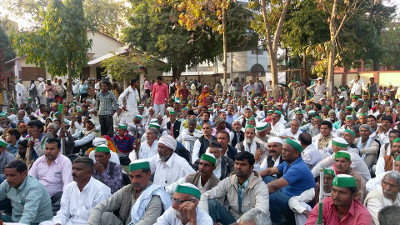 In response, on 1st March 2016, Bharatiya Kisan Union, issued an ultimatum to the district officials to immediately release Niraj Singh and Vishaka Rajput. They have also demanded that the false cases slapped on the protesting farmers be immediately taken back. Keeping in line with the original agreement, all affected farmers, including the few who were inadequately compensated, be provided compensation that is four times the current circle rate of the land. They have also insisted that one member from each family, whose land were acquired be given a job as per their qualification and monetary compensation for the families. The agricultural workers, have demanded that they be rehabilitated adequately and members of their families be given jobs at the plant. Farmers whose crops have been damaged as part of the project and whose borewells and electric transformers have been affected be also compensated adequately. Many of them, who have not been able to cultivate for four years and have seen their farm incomes dip in this period have demanded that the calculation of compensation must consider this aspect as well. The common-village land that was acquired also needs to be compensated and this must be passed onto the respective village councils for local development, the union demanded. In their demand letter, the union members have also asked for strict action on the police officers who abused their power and assaulted and jailed protesting farmers.