27 March: On Monday, Bharatiya Kisan Union (BKU), a member of La Via Campesina and led by its President Rakesh Tikait joined farmers from South Indian state of Tamil Nadu, who have been protesting in Jantar Mantar, New Delhi since last two weeks.

The farmers from Tamil Nadu, led by P Ayyakanu of South Indian River Interlinking Farmers’ Association had grabbed wide spread attention after they brought along with them what they allege are skulls of farmers who committed suicide due to farm distress.

BKU offered support to their demands for a complete loan waiver, fair and profitable price for their produce, drought relief and mitigation measures, including inter-linking of rivers.

Nearly 170 drought-affected farmers from the southern state have been on an indefinite protest in Delhi for over two weeks. 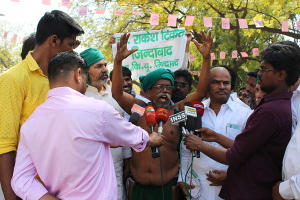 While speaking to the media P Ayyakanu, who is the President of broke down “We have been sitting here for two weeks demanding a direct meeting with the Prime Minister, so that we can convey to him our depressing realities. Over four hundred farmers have committed suicide in the last six months in my region. We are being harassed for repaying loans. How will we pay back when there is massive drought and when we don’t get a profitable price for our produce? This year we haven’t cultivated at all”

Tamil Nadu is facing the worst drought in nearly 140 years. The protesting farmers are largely from the delta area of Cauvery river.

Several of the assembled farmers from Tamil Nadu were seen holding dead rats in their mouths. “It is a symbolic act to show the extreme hunger that exists in rural Tamil Nadu now owing to the farm crisis”, said one of them.

Rakesh Tikait from Bharatiya Kisan Union said “These are farmers who have traversed 3000 kilometers to reach the capital city to convey their problems to the government. All their demands resonate with the demands of small farmers of North India too. That is why Bharatiya Kisan Union is pledging their support to our sisters and brothers from South India. It is not just in Tamil Nadu, but in every state including Uttar Pradesh farmers are reeling under heavy debt. They have been long demanding a fair support price for their produce, which is at least 50% more that the cost of production. That demand has not been met by successive governments and we want it to be immediately implemented. To reduce rural distress, it is important that the loans of farmers are waived. Bhartiya Kisan Union has also long been demanding for inter-linking of rivers.” 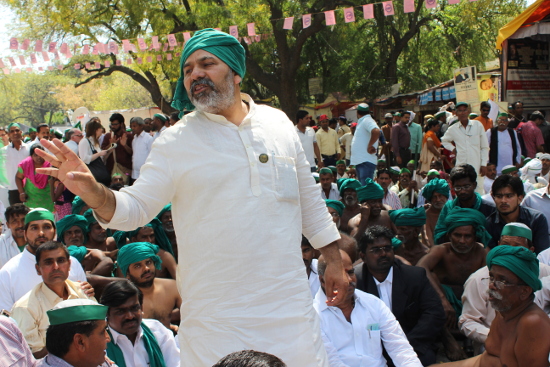 Rakesh Tikait also mentioned about the need for a National Agricultural Policy. He demanded that a committee be formed to consider all issues of the farmers – including price, issues of debt and loans. Unless a policy at a national level is not framed, we are just moving in circles.

The union leader also warned that if demands are not met, they will scale up the agitation and bring all farmers across the various states of India together. Among other leaders of BKU, its general secretary Yudhvir Singh also joined the protests today.

Bharatiya Kisan Union is also a member of the Indian Coordination Committee of Farmers Movements which has prominent farmers’ organisations of the south such as Karnataka Rajya Raitha Sangha and others as its members.

Several Tamil students were also present at Jantar Mantar offering their support and solidarity to the protesting farmers.

Reacting to the drought relief of Rs. 2000 crore issued by the Tamil Nadu government. P Ayyakannu said that it is barely enough. “For dry land we are given Rs 3000 per acre and for wet land just above Rs. 5000. How is that any relief?”

Incidentally, the Supreme Court was also hearing a petition on farmers’ suicides today and it has asked the Central government to file an affidavit with a roadmap and a detailed plan of action to deal with the issues of suicide, within four weeks. 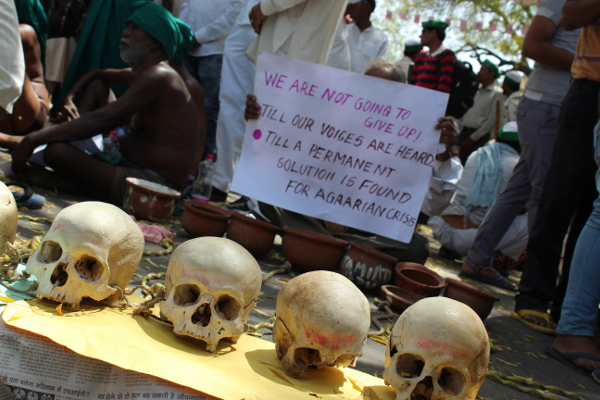 More photographs from the protests are available here.