Home » Bangladesh: The peasant associations BKF-BKS in the struggle against the effects of climate change and for solidarity 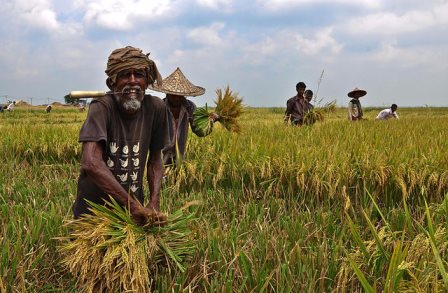 Badrul Alam, a representative of the BKF-BKS movement in Bangladesh, was in France in June 2015 and was interviewed by Pierre Rousset.

Pierre Rousset – You came to France at the invitation of the Confederation paysanne to participate in the mobilization in Amiens on June 17, in defence of peasant activists on trial for their action against the “farm of a thousand cows”.

Badrul Alam – We wanted to affirm an international solidarity with the Confederation and its members dragged before the courts for a struggle – in the face of giant industrial farms – which we fully support. Like the Confederation, we are a member of La Via Campesina. I represented in Amiens our twin associations, the BKF-BKS comprising some two million peasants in Bangladesh, half men (in the BKF) and half women (in the BKS). Having two parallel organizations has facilitated the integration of peasant women, it being understood that the husbands cannot join the BKF unless they accept that their wives should do the same with the BKS. Agro-industry imposes its law at the international level and it is very important that our solidarity is stated at this level. Via Campesina has sections both in the North (as in France) and the South (as in Bangladesh).

Before Amiens, you participated, in Montreuil, in the international meeting preparing the actions during the conference on climate change to be held in Paris next December.

We do not trust the governments and global institutions to curb global warming. However, Bangladesh is one of the countries most immediately affected by the effects of global warming. It is situated on a flat and low delta, at the confluence of the Jamuna (Ganges), Padma (Brahmaputra) and Meghna rivers. It is a region with very fertile soils through the deposits of alluvium, but threatened by floods: the major part of the territory is at least 12 meters in height – of which 10% is located below sea level, under the protection of dykes. In addition, the population density is especially high: we are the 94th biggest country by surface, but the 8th biggest by population. By and large we have a population density more than twice that of the Netherlands – for a population of approximately 160 million! So any rise in the ocean level and any extreme climatic phenomenon has dramatic consequences. We are truly on the front line in terms of climate!

To the overall effects of the contemporary capitalist mode of development on climate change, we must add its local effects. Let us take the example of the large-scale production, in the south-west of Bangladesh, of shrimp destined, inter alia, to the European market. The dikes in the polders have been opened and the very rich land where poor peasants were working has been drowned under sea water to create pools for breeding.

In the short term, the villagers have benefited from an attractive income through aquaculture; but this industry has destroyed coastal vegetation (mangroves and so on) as well as the biodiversity which was a refuge and a natural protection against the assaults of the ocean. It caused salinization of surrounding lands and their desertification, rendering it unfit for cultivation. As for the shrimp, they are now victims of infectious diseases. The “market” doesn’t care: if necessary, capital will bring destruction elsewhere. But the local population is sunk into poverty.

This problem is in fact not recent, it dates back to the early 1990s. In a region where shrimp aquaculture has been developed, nine villages resisted, under the impetus of a woman who was murdered by the police. These villages have become an island of greenery, biodiversity, an example of food sovereignty, a living condemnation of the agro-industry. It is this type of struggle in which we are engaged for the defence of the peasantry, but also precarious workers, street vendors and the urban poor or indigenous peoples (Adivasis).

We have provided aid to the textile workers who were victims of the collapse in Dhaka of the Rana Plaza industrial building in 2013 (aid to the hospitalized first, and then the purchase of sewing machines for women workers with lifetime disabilities), or to villages affected by floods or exceptional cold in the north. We have been able to carry out these actions, particularly thanks to the financial assistance that the association Europe solidaire sans frontières (in France) has been able to send us. Aid to the victims of humanitarian disaster – industrial, climatic – has become more and more a part of the tasks of the BKF-BKS.

As in many other countries of the South, we are also helping occupations of land left in fallow by big landowners (or whose ownership is disputed). A special feature in Bangladesh is that these lands occupied by the poor peasants are often big strips of sands appearing in the meanders of the rivers and can change location with time.

Can you tell us about the “caravans” that you have organized in the past few years?

For four years, we have organized Caravans for climate justice, food sovereignty and the rights of women, gender equality, in order to emphasize the interaction between all these areas. On November 14, 2014, the caravan first went through a good part of Bangladesh before travelling to India, and then back up to Nepal to participate in a regional people’s summit. Our caravans have always included foreign delegations from, in particular, other Asian countries (India, Sri Lanka, Nepal, Indonesia and the Philippines), but also Europe and elsewhere (this year the United Kingdom, Germany, Sweden, the United States and Australia). We have expanded our links including through participation in the sessions of the International Institute for Research and Education (IIRE) in Manila, in the Philippines.

At each of the twelve stages of our caravan, we organize debates and seminars with the local population, so as to multiply exchanges and awareness of the importance of climate change issues and the role played by agro-industry, such as the dissemination of GMOs. We have promoted local varieties of seeds and smallholder agriculture, studied the use of solar energy (and other sources of renewable energy), fertilizers and organic pesticides, or the organic production of pineapples and taken into account the claims of agricultural labourers. In Calcutta, in India, we have met with associations of the urban poor. In Katmandu, Nepal, the movements met to present their alternatives and responses to the climate crisis.

Over the exchanges, our common problems have emerged, faced with the hoarding of land in the hands of the rich, the consequences of the industrialization of agriculture, indebtedness, sexual discrimination (with particularly the double working day, in the fields and at home), the disruption of the climate.

Being in India and Nepal was particularly important. There is a growing cooperation, under the current Prime Minister of India, Modi, between the ruling circles in India and Bangladesh. There is a need to strengthen the cooperation of the popular movements and, in particular, between member associations of La Via Campesina. In addition, the border between our two countries is the subject of tensions, exacerbated by migration due to climate disorder; we must combat the rise of xenophobia, reinforce feelings of solidarity, the belief that we must unite in the face of adversity. To do this, we must meet.

We are confronted by a hardening of regimes that restrict freedom of movement. Thus, a visa has been required by the Indian authorities of Bangladeshis to let them go to Nepal, which was not possible and some of the members of the Caravan were not able to participate in the final stage. It was a great frustration, after such a path!

We will not organize the next caravan this year, but in 2016. We have also proposed a mobilization against the construction of a nuclear power plant planned by the government in collaboration with Russia.

In all these areas, the coordination of popular movements at the international level is we believe essential.