Home » Assassination of our sister in struggle: Berta Cáceres 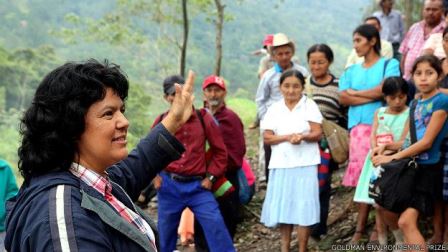 Statement and call to action from La Via Campesina

The international peasant movement La Via Campesina denounces to the national and international public that on this day, 3 March 2016 in the early hours of dawn, our dear sister in struggle, BERTA CÁCERES, General Coordinator of the Civic Council of Popular and Indigenous Organizations of Honduras (COPINH) was assassinated.

The assassination of BERTA CÁCERES took place in her home, while she was resting, which drastically increases the risk to women and men defenders, to the indigenous peoples who resist in communities, and to members of popular and social movement organizations who have taken up our legitimate struggle.

On numerous occasions, BERTA CÁCERES had publicly denounced ill-intentioned actions and threats both by the current government regarding concessions of natural resources, and by the foreign transnational corporations involved in the construction of dams and the  capture of resources that belong to indigenous peoples.

The whole world recognized the courage and contribution of BERTA CÁCERES in her struggle for human rights, when she was honored with the prestigious international Goldman Prize for the defense of natural resources in the country. We recognize the historic struggle of BERTA CÁCERES, side by side with our peoples, to claim the right to land, her struggle for the defense of our sovereignty, for comprehensive agrarian reform, for the food security of our peoples.

It is fitting to highlight that on 9 April 2014, parliament member and General Coordinator of La Via Campesina Honduras, Rafael Alegría, introduced in National Congress a proposed law for Comprehensive Agrarian Reform with Gender Equity for Food Sovereignty and Rural Development, to seek solutions through the political channels to the problems that peasants and indigenous peoples face today in Honduras. To this day, this proposal has not been taken into account by the Board of Directors of the National Congress.

For this reason, La Via Campesina Honduras denounces the government of Honduras and the transnational companies that extract and exploit our country’s natural resources.
As an international movement of peasants, we demand that the State of Honduras punish those responsible for this vile assassination, and we call to all international organizations that defend human rights to join this demand.

La Via Campesina makes a call to organize protest actions in the embassies of Honduras around the world to demand clarity in this crime, and to protect defenders of land and territory, and of human rights in Honduras.

We express our solidarity and extend our condolences to the family of Berta Cáceres, to the Lenca people, and to the people of Honduras who suffer her irreparable loss.