Originally published by The Wire on 07 June 2016

The article is written by Kannaiyan, a farmer who is also the General Secretary of the South Indian Coordination Committee of Farmers Movements (SICCFM) and a member La Via Campesina. 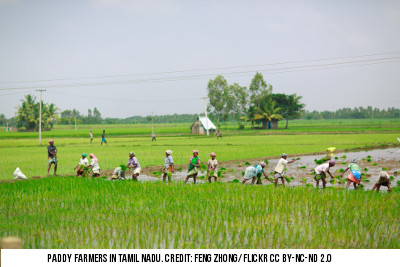 In July 2014, barely 60 days into his new role as the prime minister of India, Narendra Modi was addressing a group of agricultural researchers and scientists in New Delhi on the occasion of the 86th foundation day of the Indian Council of Agricultural Research. It was also his first public event as a newly-elected prime minister.

In a speech that was nothing more than politically correct rhetoric, Modi called for a standing ovation for India’s farmers. He even took a dig at the scientists, reportedly telling them that it is not enough to spend time in five-star seminar rooms analysing why things cannot be done, but also important to think about how these problems can be overcome.

Modi was evidently scoring a point over his predecessor, who was often accused of turning a blind eye to India’s farm force. He wanted to craft an image of a farmers’ leader. Amidst the many things he said, he also coined a new punchline, ‘per drop, more crop’,which was splashed across newspapers at the time.

Two years on, I am sitting in my farm in Gattawady village, Erode, Tamil Nadu, filled with mixed feelings. Here is why.