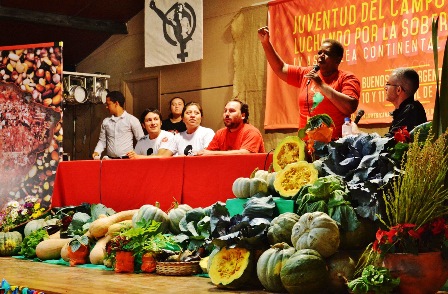 (Argentina, Buenos, April 11, 2015) The IV Assembly of Youth marked the beginning of the VI Congress of the Latin American Coordination of Rural Organizations, CLOC-Via Campesina in Buenos Aires, Argentina. The congress started on the 10th and will end on the 17th of April, and will close with a massive march in commemoration of the International Day of Peasant’s Struggle.

Over a thousand representatives of peasant movements from the Americas, Asia, Africa and Europe will attend this gathering, united by the slogan: Against Capitalism for the sovereignty of our peoples: America is united and continues to struggle. Diego Montón, representative of CLOC-VC’s general secretariat said that “The congress is arranged every four years in order to join forces in the struggle against systematic human rights violations to which our peasantry is exposed”.

Small farmers participating in the congress will analyze the struggles, resistances and proposals of rural youth and women from across the continents. The V Assembly of Peasant Women will take place on April 12th and 13th, and highlight strategies to bring an end to patriarchal capitalism. This space will underline the need to establish a new system based on the principles of peasant and popular feminism as well as food sovereignty – a central concept among peasant and indigenous movements around the world that includes the right to self-sufficiency and the right of peoples to self-determination over their food production and consumption.

CLOC-VC maintains that this congress is critical to the process of strengthening the position of the peasantry as an important actor in decision-making spaces, thus ensuring that food sovereignty is a fundamental right for everyone. According to Henry Magallanes, a youth leader from the Andean region, on his expectations of the youth assembly and the VI Congress of CLOC-VC – “Capitalism has advanced enormously in our countries. We want, as part of the CLOC-VC youth, to lay the foundations of our network in our communities. The Congress should result in policies and strategies that reach our grassroots organizations and help us to develop bottom-up campaigns”.