Home » Argentina: Agribusiness as Usual: The Death of Peasant Farming

On 10th October, Miguel Galván was murdered, stabbed to death in the doorway of his own home. Almost one year earlier, Cristian Ferreyra had been shot and killed in his house. Both men were peasant farmers from the northern province of Santiago del Estero and members of the National Peasant Movement of Santiago del Estero – Farmers’ Way (Mocase-VC) an organisation which fights for the land rights of peasants and indigenous people.

The reason for the men’s murders was that they refused to give up their land to multi-national soybean plantation companies. Whilst Galván’s attackers are yet to be identified, in Ferreyra’s case it is widely claimed that a large landowner from the area hired hitmen to remove him from his path.

In the six months after Ferreyra’s tragic death, incidents of conflict between large agribusiness and peasants decreased, but since then, the expansion of soy production has continued and so have the forced evictions of peasants and indigenous people from lands they have occupied for centuries.

Expansion of Soy and Agribusiness in Argentina

In 1996, Carlos Menem’s government approved a law that granted farmers permission to cultivate transgenic soybeans in Argentina. The decision brought about a drastic and rapid change within the country’s agricultural sector. Argentina allowed for the cultivation of genetically modified soybeans without carrying out their own tests, instead using only those provided by the multinational agribusiness Monsanto.

The economy was struggling and Menem sought large corporate contracts that could be seen as evidence of potential future recovery. Within a year, 11 million tonnes of soy were harvested from an area spanning 6 million hectares. Fast forward 15 years to today, and the entire country bares an alarming resemblance to a giant field of bioengineered soybeans. Argentina is the third largest producer of soy in the world and is responsible for one third of worldwide soybean sales. A staggering 97% of the soy harvested is exported worldwide.

Today soybean cultivation occupies more than half of Argentina’s productive land.  However, long before the arrival of the multinational soybean plantation companies, the land was largely farmed by local and indigenous peasants. In 1988, there were 422,000 small farms based in Argentina’s countryside. By 2002, this number had fallen by almost 25%.

Guillermo Neimann, a sociologist at the Latin American Faculty of Social Sciences (FLACSO) who specialises in the area of rural employment, explains that “Argentina is not a country that has historically experienced large land conflict. It is only in the last few decades that it has appeared, with the arrival of large agribusiness”.

What had previously been a diverse and self-sufficient agricultural system was rapidly replaced with a model of virtual monoculture. As Brewster Kneen, author of Farmageddon, puts it, Argentines were “quite literally forced” to produce soy “in place of milk, meat, vegetables, and lentils which were once produced in abundance on the small farms which have now been overrun by large landowners growing soy.” Nowadays, lentils are imported from Canada whilst exports of Argentina’s famous beef decline annually. “That’s like Mercedes-Benz not exporting cars!” exclaims agriculturalist and member of the Grupo Reflexion Rural, Adolfo Boy. 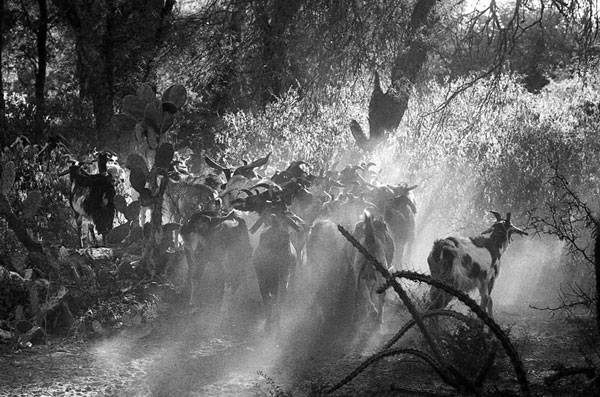 Provinces in the northwest of Argentina, such as Santiago del Estero, were hit particularly hard. Soybean cultivation in the area increased by 48% between 1988 and 2002.

Henk Hobbelink, agronomist and co-ordinator of small farmers’ rights campaign group GRAIN, gave a speech last year in which he said, “today we are witnessing nothing less than the full frontal assault on the world’s peasantry.” Nowhere does this ring more true than in Argentina.

As big agribusinesses expand their soy plantations throughout the countryside, they encounter resistance from the local farmers who have cultivated the land for centuries. Thus, they employ certain methods to remove those who obstruct their path, the most extreme cases being those of Ferreyra and Galván. The land rights of indigenous communities that have been there for centuries are ignored.

According to Adolfo Boy, the eviction process begins when “groups of lawyers, or property developers, that know the land registry, forge papers, and turn up and tell the peasants that they are the owners of this land”.  He points out that beyond this, “there are paramilitary forces, thugs and police, all practically at the service of the expanding soy companies” who help finish the job.

The original land inhabitants and owners are left with two options: move to the slums surrounding the cities or submit themselves to the inhumane working conditions of life as an employee of one of the big agricultural companies. As Kneen puts it “one does not want to wonder how many of the ubiquitous garbage pickers on the streets of Buenos Aires were once small farmers”.

In a recent interview with Radio Mundo Real, Mocase-VC leader Cariló Olaiz, declared that existing laws that protect peasant farmers are not being enforced. He maintains that in the lead up to Galván’s death, the organisation informed local authorities in Santiago del Estero that the farmer was receiving death threats and that his life was in danger. “As in the case of Cristian (Ferreyra), we filed all the accusations and we even had a meeting with a judge in July. The government of Santiago del Estero was aware of this and did nothing to stop the armed gangs,” said Olaiz.

Mocase-VC blames the governor of the province, Gerardo Zamora, directly for Galván’s murder, given his lack of action in the lead up to it. They point out that on 3rd October, the provincial government of Santiago del Estero issued a report that highlighted the dangers faced by small farm owners trying to protect their land on a daily basis. Despite their awareness of the dangers, no measures were taken to protect peasants and a week later Galván was killed. 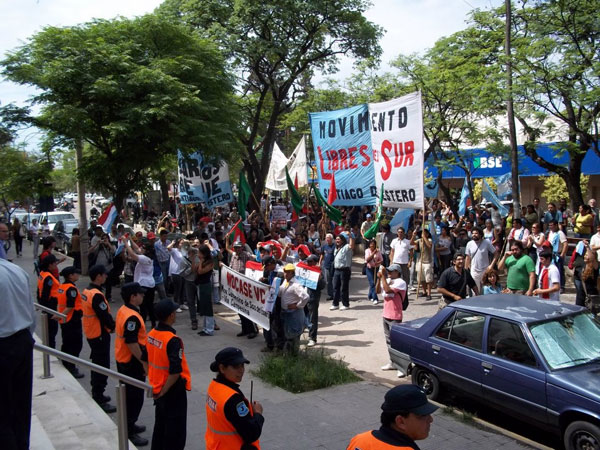 Now the National Peasant Movement (MNCI), along with other peasant and human rights organisations are urging the government and Congress to pass a new law that will bring an end to the evictions. A UN human rights council declared itself in favour of the bill, which was first called for following the death of Ferreyra, but has been consistently delayed by authorities ever since.

Edgardo Depetri is one deputy who has pledged to do all he can to pass the law before the end of the year, but campaigners remain doubtful given the government’s history of slow progress when it comes to peasants’ rights. Neimann makes the point that “a law like the one protecting peasants from evictions is very important but it alone is not going to be sufficient. We need to improve the justice system, above all at a local level. Provincial governments need to understand that regulating the expansion of agribusinesses is vital”.

The Power of Monsanto

Monsanto is one of the world’s largest food production companies. It was Monsanto’s genetically modified RoundupReady soy (RR) that was approved by Menem in 1996. The RR technology allowed for soy to grow in arid areas, and in so doing greatly reduced the need for manual labour. Monsanto dominates the current soybean market in Argentina and is the driving force behind the corporate wave that is destroying peasant farming. Kneen offers a scathing verdict: “the clear and present danger is the corporate control of food, which is what Monsanto is clearly after. On this account, and because I despise its ruthless tactics, I do not hesitate to describe it as an evil company”.

The power that is held by the world’s largest food producers cannot be underestimated. Boy describes Monsanto as “a multinational that is capable of all types of corruption” whilst Neimann says that “it acts without any restrictions”.

Despite these traits, the Argentine government relentlessly pursue bigger and longer lasting deals with Monsanto and other big agribusiness companies. As recently as June of this year, president Cristina Fernández de Kirchner announced a new agreement with Monsanto. As part of her Agribusiness Strategic Plan (PEA), the president hopes to increase grain production by 60% to 160 million tonnes by 2020, 20% of which will be soy. Following the accord, president Fernández announced that she was “very happy because Argentina is now at the forefront of biotechnology”.

Whilst the revolutionary scientific developments made by companies such as Monsanto are undeniable, their products are not without faults. The exclusive use of RR has caused biotypes to disappear, weakened the soil, and made it less productive for future farming.

Rural populations have also been affected by the spraying of the herbicide due to its glyphosate content. Local doctors complain of higher cases of miscarriage, birth abnormalities, and respiratory dysfunction. As Kneen sums up “the danger may well turn out be genetic”. Not to mention the deforestation that has to occur in order to make way for the vast soybean plantations. The region of Santiago del Estero has shown one of the highest rates of deforestation in the world with an average of 0.81% of the forest torn away each year, compared with a global rate of 0.23%.

The Crop That Just Keeps on Giving

Though unpopular among human rights organisations, against a backdrop of record-high world prices for soy and other crops, the immediate economic gains of an industrial, concentrated agricultural model have so far dissuaded politicians from taking definitive action against it. 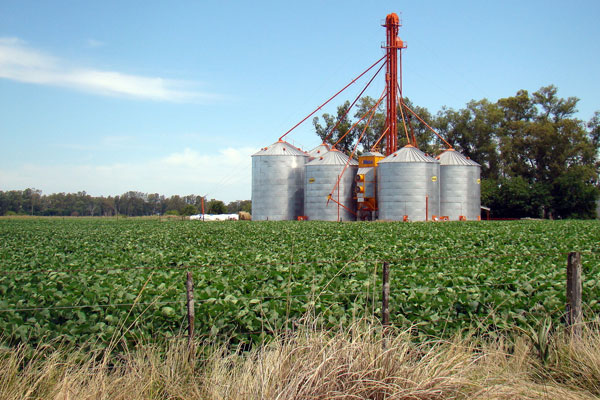 Silos of soy in the fields of Junin. (Photo: Nicolás Lope de Barrios)

Given the increase in global commodity prices, Neimann explains that soy production gave the government “the opportunity to enter the market in a way it never had before. Governments all over the world are trying to make the most of any opportunities they have in the commodities market”.

According to Boy, this is the reason why politicians sometimes employ a double standard. Officials do acknowledge that working conditions need to improve and that deforestation needs to be monitored, but yet they continue to ally themselves with the big agribusinesses.

Given the way in which international food companies are opting to persecute rather than coexist with small farmers, it would appear that Argentina cannot pursue biotechnology and simultaneously maintain a peasant farming model. Boy paints a bleak picture of the situation: “For the time being, nobody is going to break the soy model. It doesn’t matter what political party they are in, whoever comes in, is going to continue exactly as we are, because they all think the same. Not a single province or municipality is going to plant anything else. Nobody is thinking about local production or local development”.

In an interview with journalist Dario Aranda, Nobel Peace Prize winner Adolfo Pérez Esquivel interpreted the current situation as evidence of the fact  that the government “gives priority to economic interests over people’s lives”.

“It Will Happen Again”

The expansion of soy production in Argentina has equated to the invasion of peasant and indigenous territory by multinational agriculture companies. Government policy is deliberately replacing peasant agriculture with an agro-industrial model driven by the needs of multinational corporations. At both national and provincial levels, they are enabling this to happen; they are either postponing or not enforcing peasant’s rights laws, and meanwhile people continue to be killed. Widespread deforestation is taking place and cultural and biological diversity is being destroyed. 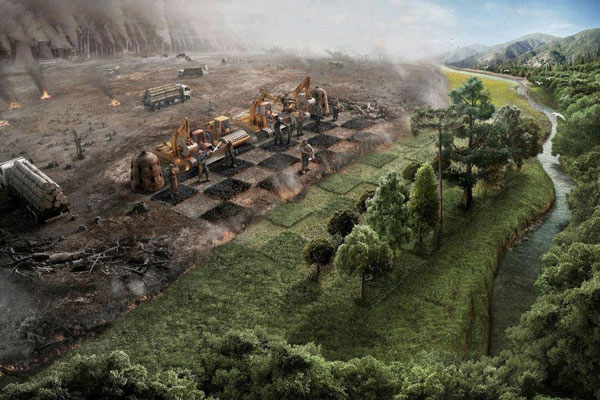 The international peasant organisation, Via Campesina, says that the expansion of soy is pushing Argentina’s small farmowners and their methods of production to the brink of “irredeemable extinction”.

“The current agricultural model is a way of farming without the farmer” says Boy. “Nowadays, politicians are not motivated by the same things we are; what has happened to us, the violence, the urbanisation, the displacement. Argentina is not a happy place. All this is because of the agricultural model”.

Following the recent murder of Miguel Galván, Mocase-VC released a statement entitled “It could have been avoided, it will happen again”. In light of the government’s recent activity regarding the new deal with Monsanto, and inactivity concerning peasant’s rights, it is hard to disagree.