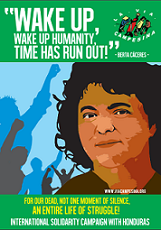 15 June 2016: The Union of Agricultural Work Committees (UAWC) has received the alarming news of the murdering of Berta Cáceres, the General Coordinator of the Civic Council of Popular and Indigenous Organizations of Honduras (COPINH), who lost her life for the sake of the right of Honduran peoples to their full sovereignty over their own lands; she lost her life while she was struggling against transnational companies and the detrimental effects of their land acquisitions and dam building projects. We have also known that Cáceres is not alone, the politically killings and death threats have increased against all human right defender in Honduras and all over the world!

In coordination with other human rights defenders and all free world people, The UAWC urgently calls to raise the voices and denounce the ongoing crimes against Human right defenders all over the World, arrange international and national social movements and activities in solidarity with Cáceres’s family, and the small farmers in Honduras and all over the World. In addition, the UAWC calls the international community to put pressure on the Honduran government and the World transnational companies to end its violations of human rights principles and the international law that protect the right to life for all people.

Thousands of horrible stories are still to be heard, more and more human right defenders are being murdered if the international community stay silent and do not to take action to put pressure on the Honduran government and the transnational companies to stop their violent attacks.

The UAWC asks for your prompt attention to this case. In solidarity