On July 4th, a group of activists occupied the building where the Japanese Embassy was located  on a 6th floor, in Lisbon – Portugal. Holding a 6 metres where it read “G8 at the table, One Planet starving”, with the objective of exposing the real consequences of the anti-democratic neo-liberal policies of the G8, and their fake recipes for the current world crisis: food, climactic and social. 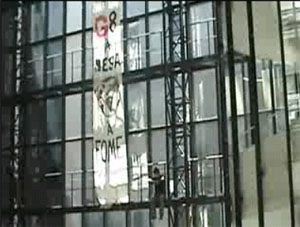 Blocked in emergency ladders, in the building main hall 10 feet high, managed to hold the 40 feet banner for three hours, right in front of the Japanese floor. The group responded to the Via Campesina call-out for the action day for “Food Sovereignty”, joining the worldwide opposition to the G8.

Whilst the security and the police failed to remove the activists, others informed the public of the actions´s objective. Three hours later, after failed negotiations, one security officer managed to climb enough to rip the banner and setting an end to the action. Despite resistance, the activists were only identified and left with no charges.

Although the mainstream media turned up, they were not allowed to do their job and kept outside the building (private property)– luckily we have Indymedia! But in the end was with surprise, that it was a reported later in the night news on TV and one newspaper.
Although the G8 speech might sound promising, the truth is that the results of these meetings have been translated into imposed policies such as bilateral agreements between rich and third world countries. In exchange of debt relief (already paid many years ago by the rape of natural resources) third world countries are forced to lift their trade barriers, leaving unprotected their economies, and forced to use precious fertile soils for western exports. Soils that must be used to feed people and not our tanks (the biofuels agenda). The right to grow our own food ( Food Sovereignty ) might sound as a granted right in Europe, but in the rest of the world it is the biggest attack to the rural communities that depend on agriculture for their survival.

Japan –  the hostage of this meeting was just recently, the main blocker to reach a consensus at the 9th convention of Biodiversity of the UN. This forum that incorporates almost all nations (the usual outsiders USA, Australia, Canada.. coincidently the biggest producers of GMO´s), was set to reach a final conclusion on a protocol that included complying measures to deal with the dramatic loss of Biodiversity that we face today – something similar to Kyoto. Due to the action of Japan, and a few others that acted as Corporations/US Gov. spokesperson, the large majority of countries failed to reach a precious consensus to protect Biodiversity.

This was a solidarity action with the struggle of social rural movements, such as Via Campesina – that fight against the industrialization of agriculture, the monoculture of the imposed export model and the privatization of the natural national heritage by multinationals.

Also in solidarity with the 13 Italian activists that face 50 years sentences, just for taking part in the organization of Anti-G8 protests in Genoa 2001. Their freedom is at the risk for fighting for a fairer, truly democratic world where freedom is genuine.

Check the video at  g8amesa1mundoafome.wordpress.com (Portugal)