Home » ‘An Ocean of People’: Solidarity takes root at Muzzafarnagar in India, as farmers hold a massive gathering

Estimates point to nearly a million people gathering for a ‘Mahapanchayat’ organised by Samyukta Kisan Morcha – the coalition spearheading India’s farm protest – at Muzzafarnagar on the 5th of September. Muzzafarnagar is the birthplace of legendary peasant leader Mahendra Singh Tikait and a stronghold of Bhartiya Kisan Union, which is among the 40 unions agitating against the three controversial laws passed by the Indian parliament in 2020.

“This gathering signals the determination of Indian peasants in pressing on with our demands to repeal the three farm laws and bringing in a legal guarantee for a minimum support price for our produce. We are as strong and committed as we were nine months ago. The Indian independence struggle lasted nearly a century. What are nine months, then? This struggle will go on until the demands are met,” says Yudhvir Singh from BKU, who is among the leaders of the coalition that leads the protests. 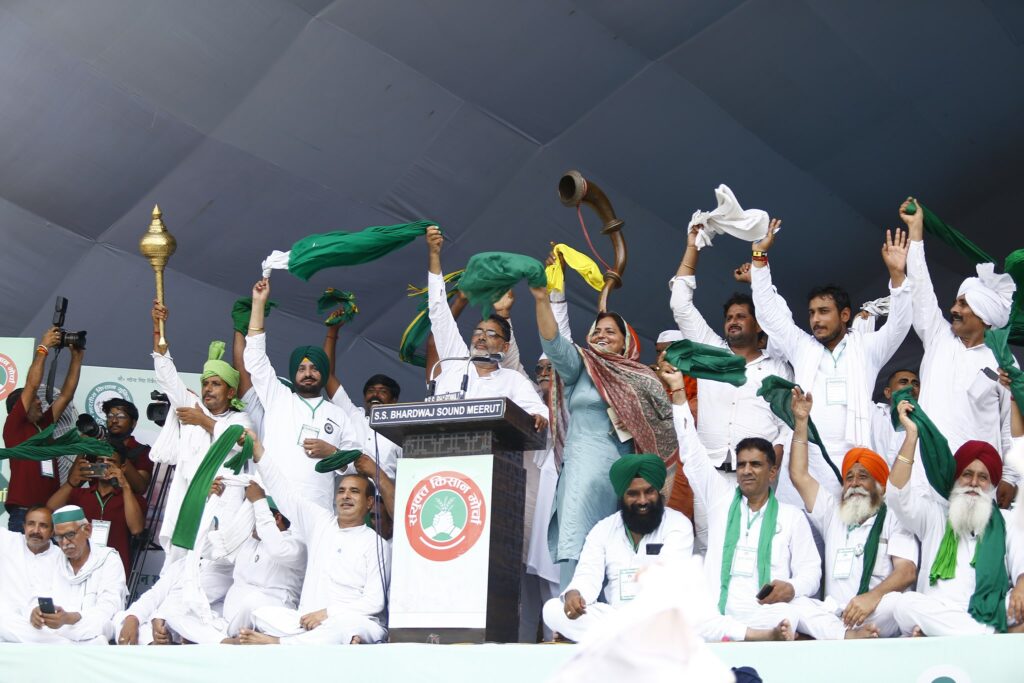 Yudhvir Singh (centre) and other leaders on stage wave the green scarf, an enduring symbol of peasant unity

“Farmers and their representatives came from all corners of the country”, says Chukki Nanjudaswamy from Karnataka Rajya Raitha Sangha. “At least 22 states were represented on the stage. The crowds filling the open grounds and streets came from Haryana, Punjab, Uttar Pradesh, Madhya Pradesh, Uttarakhand, Bihar, Tamil Nadu, Karnataka and more. If the government had any illusion that the protests will die out on its own, that has been proven wrong.” she adds.

“Streets were full of people this weekend. Many could not even reach the venue due to the long traffic jams. This massive turnout is a sign of public anger. Not just against the three unjust laws but also rising prices of food and fuel. Workers, women, farmers are all having the same grouse that while the billionaires continue to build their empires, even essentials are going out of reach of the large majority. And now the government wants also to monetise public assets – which means roads, transport etc. The working class is cornered from all sides.” adds Dharmendra Malik, the media in charge of BKU.

Nine months since the agitation began, this massive gathering gains significance as multiple States are going into elections over the next few months and farmers see an opportunity to step up the pressure. On the 27th of September, Samyukta Kisan Morcha has called for a national strike. They expect trade unions and informal workers to join in too.

“Politicians only remember us when they come seeking for votes. No price guarantee, No vote!” reminds Rakesh Tikait, the national spokesperson for BKU and among the visible public faces of the movement. 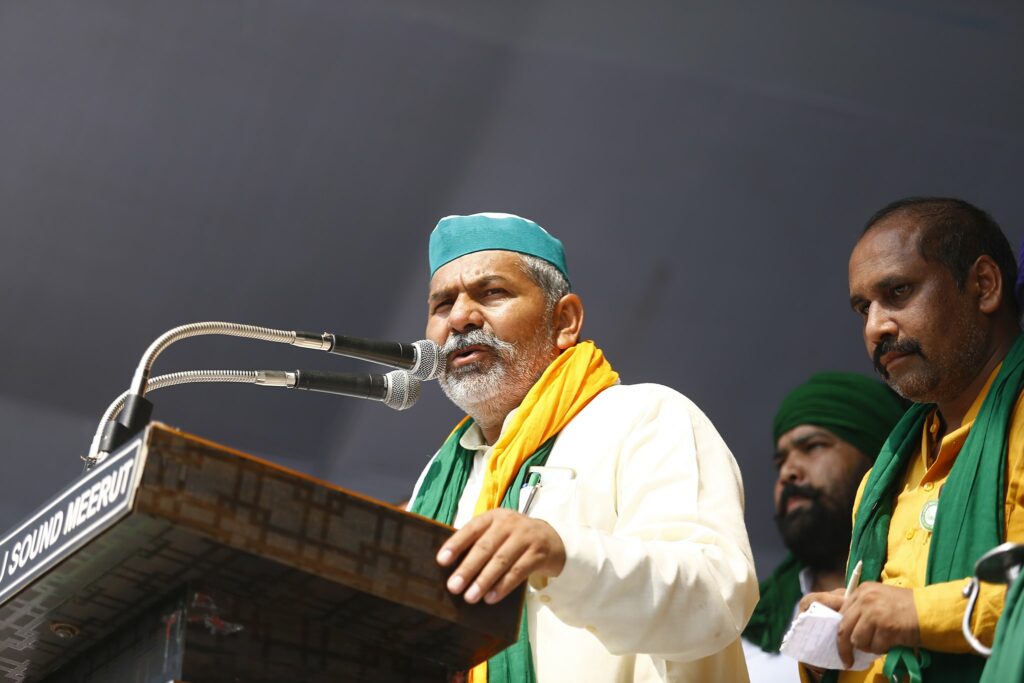 Rakesh Tikait addresses the crowd, with BKU media in-charge Dharmendra Malik by his side

“They want to divide us in the name of religion. It has been an old ploy to keep our attention away from matters that directly affect our lives and livelihoods. Privatisation is not just restricted to farms alone. Fisheries, Roads, Railways are all being put up for sale. We must not fall for any attempts to polarise ourselves in the name of religion or caste, or state borders. We must stay united and force the government to listen to public voices. No government should run this country according to the whims and fancies of a few industrialists. The majority of us are farmers, peasants and informal workers. What is good for us is what is good for the country. Not what is good for a select few corporations”, he adds.

“The Kisan Mahapanchayat in Muzaffarnagar is historical in every sense. It brought together more than one million people and highlighted that the country’s farmers are together, and farming is their only religion. We witnessed the warm hospitality of the people of Muzaffarnagar; with their support, there were more than 1500 langars/community kitchens organized. This shows the importance of urban-rural and solidarity across religions. Muslim neighbourhoods extended all sorts of support and stood shoulder to shoulder. The farmers’ movement has sent a very clear and solid message to the political traders of hatred and bigotry. Our farmers’ movement has brought a ray of hope. We will continue to organize at the grassroots to spread the messages of solidarity and communal harmony”, said Anasuyamma, senior women leader of KRRS. 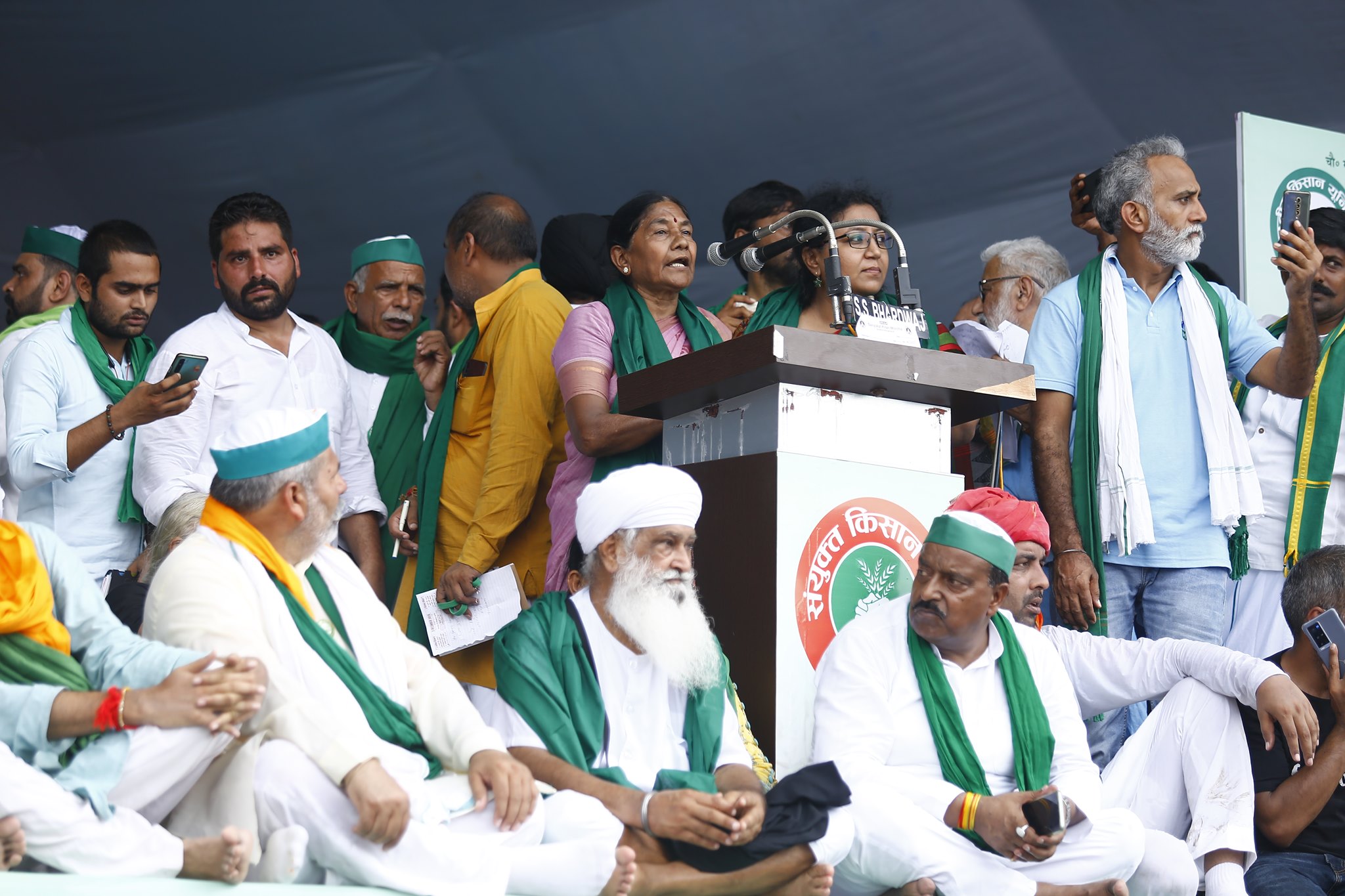 The massive gathering at Muzzafarnagar is one among many efforts initiated by protesting farmers to consolidate, build solidarity and alliances with workers unions, and bring unity among the country’s different social classes and castes.

The ruling government dismiss farmers’ protests as a political theatre, managed mainly by opposition parties. Since January 2021, no significant talks or negotiations have taken place between the government and the unions. A section of the urban Indian middle class also backs the Union Government’s efforts to corporatise Indian agriculture. Recently in Haryana, protesting farmers faced a violent crackdown by the police forces.

Disturbed by this action and also the apparent apathy of the urban middle class and affluent, a youth leader of BKU was quoted as saying, “The British adopted a divide-and-rule policy when they ruled over us. Successive Indian governments have done the same. They have divided us based on caste and religion. Now they are dividing the urban from the rural. You can call us names and look away when our heads are cracked open. But, when the corporations monopolise, and cartelise agriculture and food prices skyrocket, we, the farmers, will still somehow be able to grow our little bit of food and survive. What will you city dwellers do?”

Solidarity is also pouring in from within the country and abroad. Several Indian citizens living and working outside the country continue to organise solidarity actions in their towns and counties. Several peasant organisations and civil society actors have also issued solidarity to protesting farmers.

Chukki summarises why solidarity between citizens and beyond borders is essential.

“Food affects us all. We have seen how peasants in Europe and United States have been marginalised and even vanished from public consciousness as industrial agriculture took roots in those countries. Large farms and corporate control are the mainstays of US, Canadian and European agriculture today. Even in those so-called advanced economies, small scale farmers and peasants are denied any autonomy to share or exchange seeds and access local peasant markets. Migrant farm-workers who are employed in large farms owned by these corporations face sub-human working conditions. The whole system is stacked against small-scale food producers and workers, while corporations dominate the food systems. It has had devastating consequences on our bio-diversity, which eventually leads to a lack of diversity in the food we consume. Industrial land use, industrial storage, food processing, and fossil-fuel-led transport are among the main emitters of greenhouse gases. It also has severe impacts on public health and nutrition as chemical inputs do not just destroy soil health. These are facts now well established through global debates, research and scientific papers. Is this the path India wants to take now? Sure, reforms are necessary, but not the kind that is being pushed through. We need more public investments in agriculture, public research, and building viable solidarity economies that are local, agroecological and suitable to each landscape and climatic condition. Hence our people in the cities should side with the farmers. Because what we do now will have severe implications on what we eat a few years down the line.”

Video analysis on the implications of the Kisan Mahapanchayat

For latest updates on the farmers protests in India, follow the official pages of Bhartiya Kisan Union and Rakesh Tikait