Home » Agroecology as a way of life

Organizations join forces to strengthen the fight for food sovereignty. 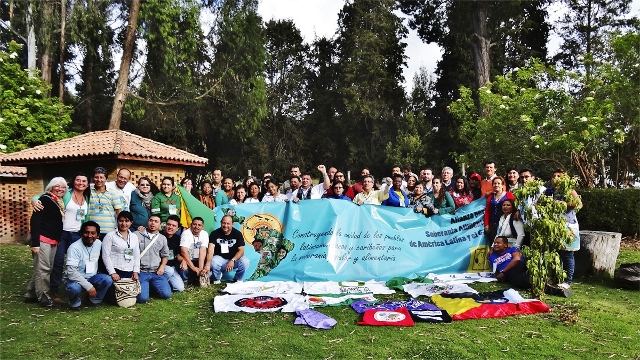 “Food is not a commodity but a human right, recognized by states through different legal instruments. By recognizing this right, states have the obligation to respect, protect and guarantee the people’s right to food — especially of food producers — to guarantee the right to decent work and employment as well as to a fair wage, based on the principles of social justice and human dignity,” states the declaration of the First Assembly of the Alliance for Food Sovereignty of Latin America and the Caribbean.

The meeting, held on Aug 6 and 7 in Bogota, Colombia, was called by various regional organizations engaged in the fight for food sovereignty, including the Latin American Coordination of Rural Organizations-La Vía Campesina, the Agroecological Movement of Latin America and the Caribbean and the Pesticide Action Network, among others.

Representatives of 23 Latin American and Caribbean networks, movements and organizations, and of 11 Colombian organizations, concluded with the Alliance creation process, an initiative launched in 1996 at the Second International Conference of La Vía Campesina in Mexico.

The main commitment is to “take forward the fight for food sovereignty, considering it a principle, vision, legacy, right and duty built by indigenous peoples, peasants, family farmers, artisanal fishermen, women, afro-descendants, youth and rural workers that has become an umbrella platform for our struggles and a proposal for society as a whole.”

Other commitments include the defence of territories against hoarding, extractivism, privatization of state assets and large-scale agribusiness.

Agroecology was chosen as “a way of life that recovers all we have lost, a connection with ancient knowledge,” as it rescues local markets and knowledge of communities, raises debate about the prices and encourages exchange and barter as a model of a social and solidary economy based on sustainability, redistribution and reciprocity.

“It is an alternative proposal to the climate change that mainly affects local food producers,” states the declaration.

One of the achievements of the institutions that make up the Alliance is that international organizations such as Food and Agriculture Organization of the United Nations (FAO) agreed in 2012 to discuss food sovereignty understood as “the right of people to control their own seeds, land, water and food production, ensuring through local, autonomous (participatory, community and shared) and culturally appropriate production, consistent and complementary with Mother Earth, the peoples’ access to sufficient, varied and nutritious food, deepening the production of each nation and people.”

The FAO defends food security to overcome hunger in the world. La Vía Campesina, however, believes that it is not enough for food to be available, accessible, sufficient and safe. The organization is trying to achieve food sovereignty through “giving priority to local production and consumption of food.”

Since 2008 there has been an increase in international food prices, which has led to nearly 50 million people in Latin America and the Caribbean (8 percent of the total population) suffering from hunger.  According to the FAO, the situation “is not a result of insufficient production or lack of food supply, but it is fundamentally due to a lack of access to food of an important sector of the population that does not have enough income to acquire food.”

Some 80 percent of farmland in Latin America and the Caribbean are family farms, according to the FAO, that has declared 2014 International Year of Family Farming.

“The objective of the Alliance is to be the instrument of unity for people fighting for food sovereignty as a significant example in building a new social model, based on the Good Living and on the sovereignty of the people,” the declaration states.