JAKARTA–About 100 women peasant member of Serikat Petani Indonesia (SPI) gathered at the Hotel Indonesia roundabout, Jakarta (16/10) commemorating the 2009 World Food Day. They were doing a peaceful rally by walking around the big fountain. 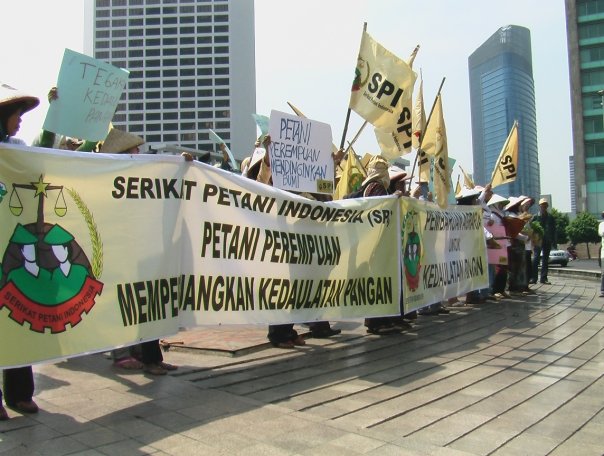 In the rally, the people demand the government to quickly establish food sovereignty in government’s policies. This is mainly connected to endless import surge on many agricultural products in Indonesian soil. In addition, they also complained about peasant marginalization, particularly women. Approximately 70 percent of women work at the agricultural sector. The fate of peasant women was alarming, given the increasingly widespread agricultural products that contain chemicals that can damage the body and female reproductive tool. Therefore, the government must promote sustainable agriculture that is more healthful and environmentally friendly. All in all, they want the current and next government (to be inaugurated next week) brings to front a blueprint of agriculture policy based on food sovereignty.

The mass also brought with them food produced from organic farming like rice, bananas, kale, spinach—others are mostly fruits and vegetables. There was also a theatrical action, to expel foreign transnational corporations from Indonesian soil. This theatrical action was also described how women peasants depend on the agricultural products which contain many chemicals that can interfere with their reproductive health.

Iin, a peasant woman from Yogyakarta, in a speech she delivered, was reiterating her commitment not to leave the village and her home, because a large number of rural people are being forced to migrate—the destinations are either urban area or even abroad. But she will restore and maintain her village as a place of peace and fertile with resources that carries food sovereignty. With so villagers can return to their daily work to provide healthy food and local food-based food sovereignty.

“May we be freed from agricultural products that contain chemicals that damaging the land and most damaging family health, and also freed from dependency on seeds and fertilizer produced by transnational corporation,” said Wilda Tarigan, Chairman, Department of Women Peasants SPI. She also elaborated more the conjunction of transnational corporations to liberalization mechanisms such as the multilaterals WTO’s Doha Round, and Free Trade Agreements (FTAs) as well.

This action is also manifested as a protest against Government of Indonesia’s policies that so far have been liberalizing agricultural sector in Indonesia. Green revolution with maximum chemical inputs, export-oriented monoculture farming, agro-fuel, green desert, and food estates have been deteriorating peoples’ food sovereignty. “Therefore, the alternative is here, we bring now to the action,” snapped Wilda. The organic food, the agro- ecology system of producing, cooperatives and direct-marketing were the real practices that the action is about. “We want our government to really-really support these alternatives from the people to realize food sovereignty,” she ended the speech.*****