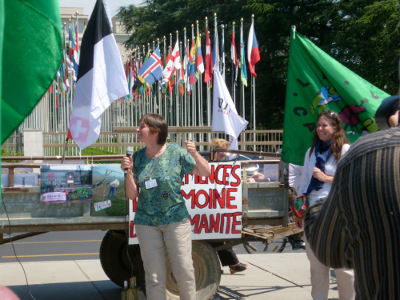 (Switzerland, Geneva, June 27, 2014) On June 27th, the United Nations Human Rights Council Assembly passed a resolution authorising the continuation of the process of drafting an international declaration on the rights of peasants and other people working in rural areas. Bolivia is in charge of starting up informal consultations between States and civil society as well as organising the second session of of the Intergovernmental Open-Ended Working Group, which is scheduled to take place in November 2014.

The declaration project originated with the Via Campesina, and it is the fruit of ten years of work on the part of this international movement which is comprised of more than 164 organisations in 73 countries. The Via Campesina set itself the task of categorising the forms of discrimination suffered by people working in rural areas (peasants, agricultural workers, nomads and pastoralists, fishers, indigenous peoples, landless workers, etc.) and, with the support of organisations such as FIAN-international and CETIM (the Europe-Third World Centre), of defining the specific human rights applicable to their situation.

In March 2012, the Assembly of the Human Rights Council accepted the final text resulting from a series of studies carried out by the Council’s Consultative Committee. In September 2012, the Assembly voted to create an Intergovernmental Open-Ended Working Group that was given the responsibility of drafting a declaration on the basis of the preliminary version annexed to the final study. In July 2013, the intergovernmental group held its first working session.

Thus, at the Human Rights Council’s 26th session, the member states voted on the resolution (for the renewal of the intergovernmental group’s mandate) that was presented by Bolivia. 29 countries supported the resolution; 13 countries abstained; and 5 countries voted against the resolution (*).

For the Via Campesina these figures, which show growing support for the declaration process, are an indication of success (In 2012, there had been 23 votes in favour, 16 abstentions, and 9 in opposition). It should be noted that countries such as France, Austria, Germany, Italy, and Ireland, which had previously opposed the resolution, this time took the option of abstaining. This was not only the result of intense advocacy with their respective governments by the peasant organisations of the European Coordination of the Via Campesina and by civil society organisations, but it was also an encouraging sign that governments are looking upon peasant agriculture more favourably. The various Via Campesina delegations carried out their advocacy work during the session.

In the coming months, the Via Campesina and its allies will redouble their efforts to overcome the continuing reticence of certain States and to convince them of the need for a declaration of this kind. At a global level, this international declaration project will serve to protect peasant agriculture as a whole – an agricultural model that produces 70% of the world’s food on barely 25% of the land. The Via Campesina is defending small scale peasant agriculture both in the South and in the North of the globe.

The Via Campesina expresses its thanks to Bolivia, South Africa, Cuba, and Ecuador for their efforts within the Human Rights Council to bring about constructive advances in the work on this project.