Within the framework of the annual Conference of the Community Food Security Coalition (CFSC) held in Des Moines, Iowa, October 10th to 13th, La Via Campesina received the 2009 Food Sovereignty Prize for its relentless struggle for Food Sovereignty for people of the world and against the disastrous neoliberal system of industrial agriculture. 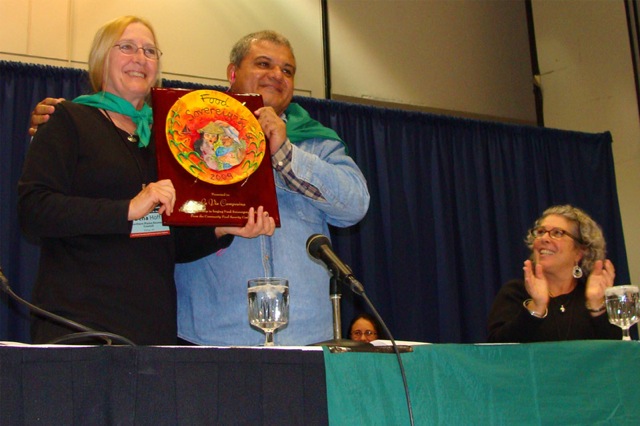 In front of hundreds of delegates from the United States and other countries, Dena Hoff from the North American region and Edgardo García from the Central American region were awarded the prize. Introducing the prize, Molly Anderson President of CFSC, highlighted the international leadership of La Via Campesina in the movement that aims at creating a more democratic food system to solve the growing problem of hunger in the planet.

Dena Hoff, farmer from Montana and head of the National Family Farmers Coalition (NFFC), speaking on behalf of the millions of peasants, women, indigenous people, migrant rural workers and young people, accepted the prize and the distinction bestowed upon them, repeating the engagement of La Via Campesina to keep working for Food Sovereignty in all corners of the world.

Edgardo García, leader of the Rural Worker Association (ATC) from Nicaragua, thanked all present for their solidarity and called for the implementation of the deep-seated changes required for Food Sovereignty. Nobody should suffer hunger and the food needed by the people should not be in the hands of greedy corporations whose only goal is for maximum profit. We should all strive for a democratic and fair society with universal dignity. The spirits of all at the conference were raised when Edgardo read a message from Rafael Alegría, leader of La Via Campesina in Honduras and also the National Front of Resistance against the Coup, calling for concrete solidarity from The North American people with the heroic struggle of the Honduras people. “This prize, said Edgardo García, will accompany the peasant and popular struggle in Honduras”

It is symbolic that this prize awarded to La Via Campesina, should be given only days before the opening of another event in the same town: the World Prize for Food awarded to individuals for their notable contribution to biotechnology in agriculture. This prize was first established by the Nobel prize laureate Norman Borlaug also known as “Father of the Green Revolution”

It is also symbolic that the conference and the 2009 prize for Food Sovereignty was awarded in Iowa with its large plantations of maize and Soya, home to the corporation Pioneer Hibred International, and the state who likes to be called “the state who feed the world”

This prize is the first one awarded by CFSC during an annual conference. The decision to call it a prize for Food Sovereignty and to give it to La Via Campesina recognize the fact that La Via Campesina was the first to present the concept of Food sovereignty as an alternative to the neoliberal model of food system – a system which increases hunger, destroys peasant ways of life and displaces indigenous peoples, and which has allowed the food distribution and production to be controlled by a handful of multinational corporations which is currently leading to a crisis which threatens the whole world.