Home » 16 October: La Via Campesina relaunches “Global Campaign for Seeds, a heritage of Peoples in the Service of Humanity”

La Via Campesina relaunches the “Global Campaign for Seeds, a heritage of Peoples in the Service of Humanity”, on the occasion of the International Day of Action for the Food Sovereignty of Peoples and Against Multinationals 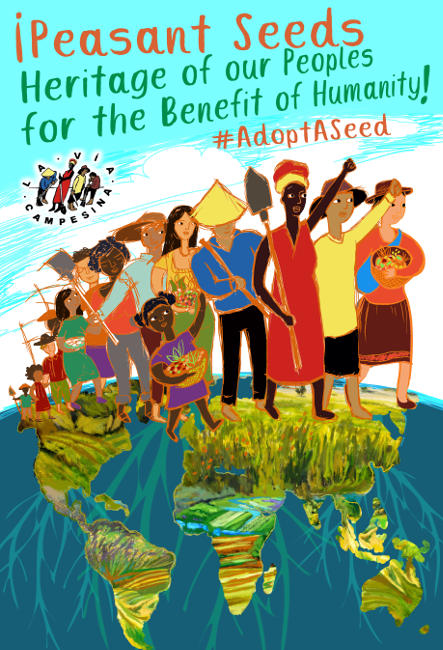 (Harare, October 16, 2018) Peasants’ seeds are a heritage of peoples in the service of humanity. They are the basis of global food production and they enable peasants to produce and consumers and citizens to find healthy and diversified food. They allow us to resist, maintain our ancestral cultures and defend our peasant identity.

However, these seeds of life are threatened by the seed policies of rich countries, free trade agreements and agribusiness. Under the pretext of “improving” seed productivity, agribusiness has created a neo-liberal seed system that has homogenized, impoverished and monopolized seeds, causing the loss of three-quarters of seed diversity and annihilating a diversity that it took people – thanks to the work of peasants – 10000 years to generate.

Three companies, Monsanto-Bayer, Syngenta-ChemChina and Dupont-Dow, control more than 50% of the world’s commercial seeds – increasingly genetically modified seeds to resist herbicides and produce insecticides. Under the impetus of the WTO, the World Bank and the IMF, and through free trade agreements and laws protecting seed and breeders’ rights, such as UPOV standards, this seed system only allows the circulation of its own seeds, criminalizing the saving, exchange, donation and sale of local farmer seeds.

The situation is such that farmers have lost a lot of their local seeds, are put in prison for the defense and exchange of their seed heritage, and risk raids and seizure of their seeds. Biodiversity is destroyed by the use of chemical fertilizers, hybrid seeds and genetically modified organisms developed by multinational companies. Citizens have difficulty accessing healthy, diversified and healthy food.

La Via Campesina and its allies are fighting to change the situation. All over the world, La Via Campesina and its member organizations are stepping up their efforts in training, education, mutual support and seed exchange. We fight for national laws and international treaties to guarantee the rights of farmers to save, use, exchange, sell and protect their seeds against biopiracy and genetic contamination, we write books on the history of seeds, carry out studies and mapping. We also found agro-ecology schools and organize peasant’ seed exchange fairs. We exercise our right of self-determination to select the seed varieties we want to plant and reject economically, ecologically and culturally dangerous varieties. These are rights affirmed by the International Treaty on Plant Genetic Resources for Food and Agriculture and by the United Nations Declaration on Peasants’ Rights which has just been adopted by the Human Rights Council in Geneva. It is also the only way to ensure healthy food for citizens, the preservation of biodiversity and the achievement of food sovereignty.

It is in this spirit that we launched in 2001 in Rome the International Campaign of Peasant Seeds, a heritage of peoples in the service of humanity, with the objective of promoting the recovery of traditional systems for the conservation, maintenance and exchange of local seeds and the inalienable collective rights of peasants over their seeds. On this October 16, 2018, on the occasion of the World Day of Action for Food Sovereignty of Peoples and Against Multinationals, we are relaunching this campaign and the “Adopt a Seed” action.

We call on every peasant, peasant family or community to engage in the adoption of a variety of plant or animal seeds, to become the guardian of this seed, ensuring its propagation, reproduction and distribution and to engage in the collective defense of their rights to use, exchange, sell and protect them. In this way, we will create a large network of peasant seeds to save those that have become rare and extend production towards the food sovereignty of peoples.

By adopting a seed, peasant families preserve their identity and territory and affirm their peasant way of life. They claim the historical memory and ancestral culture of seed management, promoting an urban and rural ecological agriculture that reproduces the miracle of more seeds and food of better quality, taste and nutritional value.

No government measure can limit the collective rights of farmers to use, exchange and sell their seeds. Free consent between farmers should be applied without restriction.

We feed our peoples and build the movement to change the world!